Electric Fishing Reels: When Are They Used? | FishAnywhere

Electric Fishing Reels: When Are They Used? 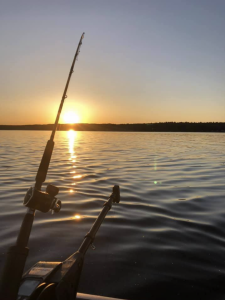 Many anglers may never come across an electric reel, while some may not even know such a thing exists. The main, and somewhat self-explanatory difference between an electric reel and a conventional reel is the presence of an electric motor. The electric reel uses this motor to turn the spool and pull the line in. The angler just holds down a button or flips a switch and the motor starts hauling in line. Electric reels can come in all sizes. Some are smaller, and designed for anglers who can’t turn the handle on the reel due to a physical condition. Electric reels for light tackle and freshwater fishing are usually custom orders. Bigger electric reels, like those designed for deep offshore waters, have cords that plug into the boat’s power supply. Additionally, some electric reels come with a manual override, meaning the angler can switch to electric if he or she gets tired. Some electric reels have detachable motors, enabling the angler to remove the electric functionality entirely. Why Electric?

Manual reels rely entirely on the angler to turn the handle and bring the line in. When a fish is on, the angler has to crank the handle to pull in the fish and the line. Catching large, bottom-dwelling fish in extremely deep water is where this becomes more of a factor. Larger electric reels for saltwater fishing are commonly found on commercial fishing boats. The electric reel cuts the effort needed to pull in fish. As commercial fishermen are out there to make a living, not for pleasure, reducing the workload is a welcome idea. When fishing really deep, 500 feet or more, the motor can haul the bait off the bottom quickly, moving to the next reel and the next until all the baits are in. This is true for the recreational crowd too. Savvy recreational anglers who like to drop huge jigging spoons deep and work the silver plugs all the way to the surface will also have electric reels. Jigging a crappie or bass spoon in 30 feet of water all day is not a problem. Take a 10-ounce deep sea spoon and haul it 500 feet to the surface and you have a serious workout. Do that a dozen times and you quickly understand why an electric reel is a good idea. The same idea holds when fishing as deep as 1,000 feet or more and using pounds of lead to get the bait to the bottom and hold it there. Cranking that much weight off the bottom is tiring. Electric reels also mean less cranking is needed when fighting a fish. Once you tie into a tackle-buster, you understand the hard work needed to keep turning that reel handle to get the fish in. Electric reels take the strain off, making them ideal for kids and people who simply don’t have the arm strength to fight a huge fish to the boat. It also takes less work to get a heavy bait off the bottom, even in shallower water, when it is time to move. Is it Cheating?

The ongoing discussion about electric reels is focused on the sporting use of the motor. The International Game Fish Association (IGFA) is clear on this. An electric motor on a fishing reel is not sporting. IGFA rules say the fight between an angler and the fish is just that. Once the fish is on, no one may help the angler fight the fish to the boat. IGFA adds if an electric motor is used even once in a day of fishing, that reel is considered an electric for the rest of the day, even if the motor is removed and never used again. “Power driven reels of any kind are prohibited. This includes motor, hydraulic, or electrically driven reels and any device that gives the angler an unfair advantage in fighting the fish,” says the IGFA angling rules web page. That being said, there are certainly applications in which the use of an electric reel just makes sense. If you are on an offshore trip over deep water and the fish are biting, you may not want to waste time or energy cranking fish off of the bottom. This would decrease the total number of fish caught during the trip. Similarly, if you are drifting bait over a nearshore reef, you would likely reach for a conventional setup that allows for more finesse in casting and fighting the fish.