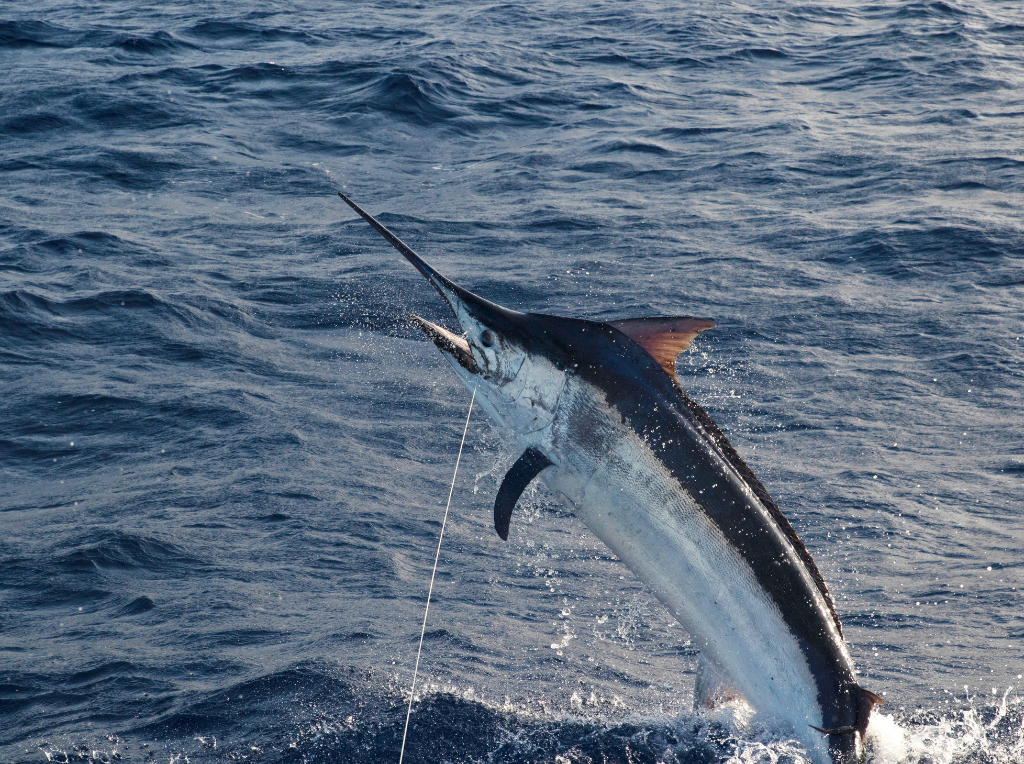 Moving like a torpedo through the water, pelagic fish are quicker than any other fish out there. We’re talking marlin, sailfish, wahoo, and more. And the way these fish fight once the hook is set, it’s an adrenaline kick like no other. Anglers can spend years dreaming of hooking up on one of these trophies. Well stop dreaming and book a charter with FishAnywhere.com to land a favorite offshore sportfish! We’ve partnered with professional anglers, Captains that bring decades of local knowledge to the table when you hit the water with them. All you have to do is plan your trip during peak season, they’ll take care of the rest! Supplying you with top of the line fishing equipment, as well as a charter boat equipped with a range of “fish finding” equipment, you’ll have every advantage needed to hook up on your bucket list fish when you book your charter using FishAnywhere.com Let’s take a look at our Top 5 Offshore Sportfishing Species and the charters that can get you on the fish!

T has earned the reputation as the “Sportfishing Capital of the World”. The Gulf Stream can be found just a few nautical miles off the coast, and almost all major big game species travel in the Gulf Stream throughout the year. And one of the top coveted sportfish? Sailfish. These easily identifiable billfish have a majestic dorsal fin that imitates the sail of a boat, hence the name. They are the fastest species in the ocean with blue coloring on top and gray or white on the bottom, and typically weigh 120 to 220 pounds and reach an average of 8.5 feet. They are full of muscle that they use to explode out of the water and fight the line. If you’re near Key West, can help you land your next sailfish trophy. Sailfish can also be caught around the world in subtropical waters.

Similar to sailfish, swordfish is another billfish species hitting our list. Swordfish don’t have the same recognizable dorsal fin, instead their long flat bill sets them apart. They also grow much larger than other billfish, upto 15ft long and over 1,000 pounds. Florida is a known hotspot for swordfish, they are found anywhere from Jacksonville to the Florida Keys in the nearby Gulf Stream. One of our favorite charters is , . Captain Lou offers 8-hour offshore trips specializing in swordfish, either during the day or at night . He also offers shared trips at reasonable rates for those closer-to-shore fishing excursions. Swordfish are known for their acrobatic leaps, so once you do have one on the hook make sure you have your camera ready!

No other species resembles a torpedo as much as tuna. These sleek and fast moving fish are often on the top of anglers bucket-list. And while there are , none quite get our attention like the bluefin. Bluefin tuna can grow to 1,000+ pounds and provide fantastic sashimi, sushi, and more. Anglers with Bluefin on their mind head to for a tuna adventure. The Gulf Stream is in close proximity and , located in Wanchese, is known for getting customers on big fish! Schedule your trip anytime between November and May for best results.

Another torpedo-like species, wahoo are also incredible sportfish that gets anglers dreaming of an offshore adventure. And talk about fast?! Wahoo are definitely at the top of the speed charts. Instead of your typical trolling trip where boats troll at speeds of 6-10 knots, these blue and gray striped fish are caught while high speed trolling at speeds of 15-20 knots; now that’s fast! They are found during winter months along the East Coast of Florida, from Jacksonville to the Keys. We’ve chartered with and crew ; trust us when we say these guys know how to fish! And even better, wahoo are really good eating. Similar to tuna sashimi, fresh wahoo is mouth watering to those in the know. If you’re looking for an extreme sportfishing adventure with delicious results, a wahoo charter is exactly what you need.

We saved the best for last. In our opinion, marlin is the best of the best when it comes to offshore fishing. Maybe that’s because it combines the speed, strength, and acrobatics of the above species into one incredible sportfishing excursion. While there are , we don’t really have a favorite. They each earn our respect and gratitude for a drag screaming, rod bending fight. And while you can target this incredible species around the world in subtropical waters, our favorite place just happens to be in the Pacific Ocean off the coast of Central America. Get your favorite fishing buddies to Quepos, , and for an amazing marlin adventure. Your Offshore Adventure These Top 5 Species are just some of our favorites. Did your favorite make the list? If you’re looking for a really fun family adventure, look no further! These offshore adventures are sure to be the talk of your vacation, especially when you land a big trophy! and filter by species to find a nearby charter at the best prices. Your adventure is waiting!