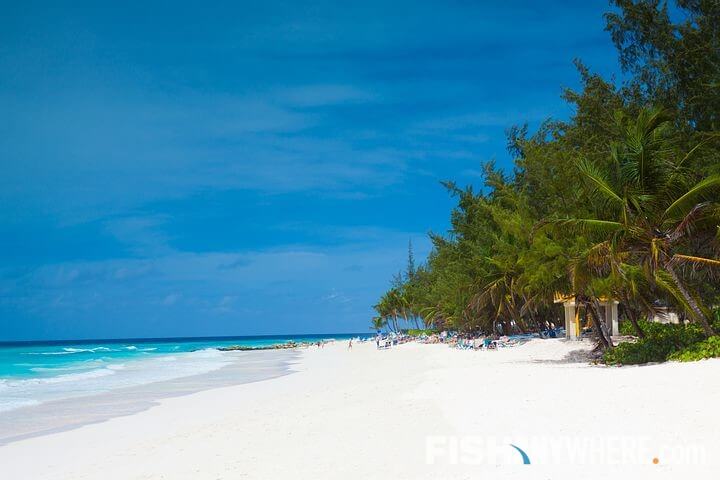 Whether you arrive by land or by sea, it won’t take you long to realize that a trip to Barbados can be as busy or as relaxing as you want. There’s enough to do to keep you busy 24 hours a day, or you can hand pick what you want to do and just enjoy that. If you’ve never visited Barbados, here’s a warning: it’s hard to think about fishing when you start wandering around the island. Barbados is an eastern Caribbean island and an independent British Commonwealth nation. It is located on the easternmost island of the West Indies and is a never-ending treasure of attractions. There’s Carlisle Bay (a marine park with a lighthouse), Animal Flower Cave and Restaurant, Andromeda Botanic Gardens, Hunte’s Gardens, Barbados Wildlife Reserve, Bottom Bay and Paynes’ Bay Beach. Must visit spots also include the George Washington House, Saint Lawrence Gap, Browne’s Beach, Welchman Hall Gully, Bathsheba, Mullis Beach, Crane Beach, and Pebbles Beach. History buffs will want to see the Barbados Museum and Historical Society, a local social, art, and military museum; the Parliament Buildings; and the Folkestone Marina and Visitor’s Centre. As you can see, there’s a lot to discover during your Barbados stay. The majority of visitors arrive via air with easy flights in and out of the island from numerous locations. The island also has a deep water harbor at Bridgetown that is a landing spot for a number of cruise ships from Britain, Europe, and America. You’ll be greeted on the island by a happy, character filled group of people who like to be called Bajans. And when you get here, know what you want so you won’t waste any time. As the old Bajan saying goes, “Cat luck ain dog luck”. Translated that means just because something works for one person, it isn’t the thing for another. Make sure you find your thing and enjoy it.

And that should include some fantastic fishing. Charter trips offer a variety of options, and with a pro fishing guide you don’t have to rely on any luck. Just go catch fish. This island offers an unique type of fishing trip that makes it popular. It’s called “fish and swim”, and includes going out and catching fish, then finding a good reef to swim or snorkel over and just chilling out. Some captains can even cook your catch on board while you cavort in the water. It’s the Caribbean version of “eat, sleep, fish”. Fishing Barbados is available all year long, but the best season to fish is from late November until the end of April. That is when the big game fishing is really superb. Barbados is heavily populated with fish and some of the most sought after species include barracuda, mahi-mahi, sailfish, yellowfin tuna, wahoo, and blue and white marlin. These are usually targets of offshore trips. You can also catch fish right around the island, like bonefish, tarpon, and flying fish. Speaking of flying fish, it’s one of the things that makes Barbados popular. It is sometimes referenced as the “flying fish island” because of the big population of these fish. It’s also the main ingredient in the island’s national dish. Steamed flying fish is combined with local Bajan seasoning and served with cornmeal and okra cou cou. Don’t miss out on this delicacy. You can catch plenty of other fish, too. Most of the good fishing isn’t far offshore from Barbados. There is deep water less than a mile of shore both to the south and west of the island. The local captains can not only take you to the best waters, they know how to catch fish and can teach you quickly. You can also surf fish on the island, since there are 50 miles of coastline. You can throw your bait out and bottom fish for grouper or snapper, or you can also cast for barracuda, bonefish or tarpon. You can often catch sharks as well. The tide plays an important part in surf fishing with an incoming tide providing the best fishing. Two popular spots are Speightstown and Holetown, both located to the west of the island. Diving and snorkeling the many beautiful reefs around the island also let visitors see all kinds of fish, plants and aquatic life.

Three days isn’t enough. Seven isn’t either. But when you visit Barbados, you get in what you can with the time you are allowed. But make sure you try and work in a great fishing trip on this island as well. You’ll be glad you did. A lazy afternoon, or even an entire day, aboard a charter boat catching fish, swimming, and enjoying life is a must here. Book a charter with FishAnywhere.com and all the work is done for you. Whether you are alone, with family, or with a group of friends, you’ll be glad you did. There are lots of options so pick the one that is right for you and Go Fish!