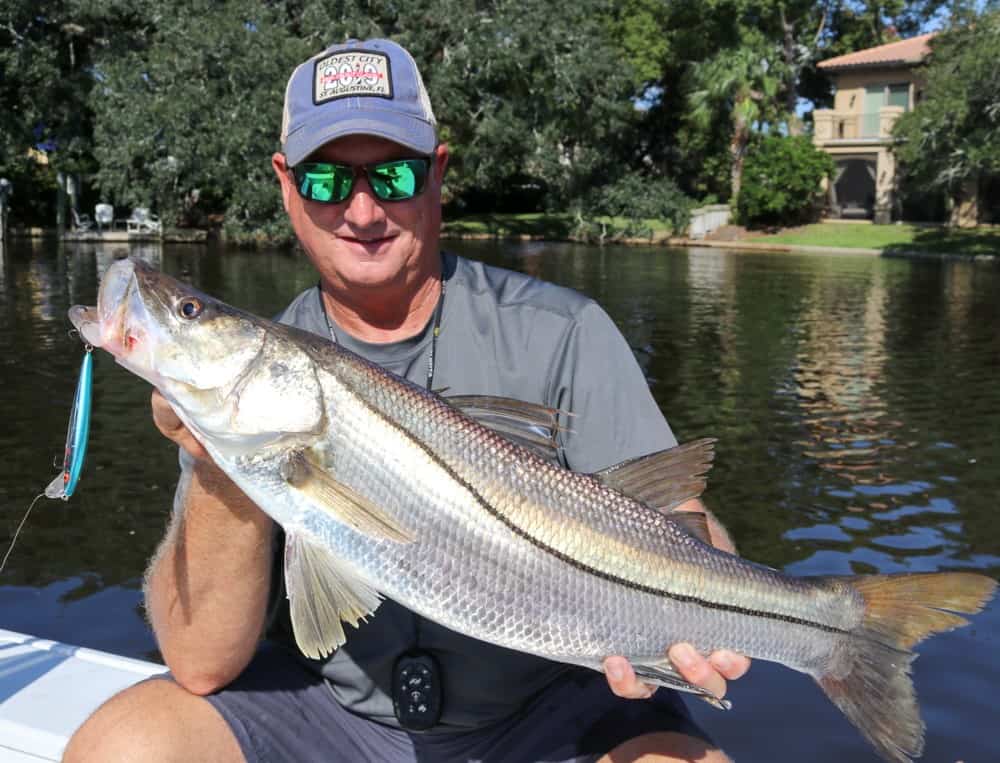 One of Florida anglers’ favorite fish to catch is without a doubt Snook. These silver linesiders are aggressive, fun to fight, and delicious to eat. Believe it or not, there are five different Snook found in Florida. Snook are very identifiable as a whole, but let’s break down the differences between, Largescale Fat Snook, Smallscale Fat Snook, Swordspine Snook and Tarpon Snook.

Such a bland name for a popular species. Perhaps it should be called “Popular Snook”? Common Snook is the largest and most common Snook species caught by Florida anglers around the state. They are usually between 3 and 15 pounds, but can grow up to 48 inches and weigh as much as 40 pounds. This type of Snook is found throughout Florida, from the Panhandle to the Keys, and near Caribbean islands of Cuba and Puerto Rico.

Anglers can identify the large-scale Snook by, yep - you guessed it, the larger scales along the body. They are also wider (or fatter) than other Snook. Large-scale fat Snook typically grow between 12 and 16 inches, but can reach upto 28 inches long. This is a fairly new Snook, recently discovered in 2006. They are found between Sebastian and Jupiter on the east side of Florida. They are very similar to small-scale fat Snook, just with larger scales.

Tarpon Snook have characteristics of a tarpon on their head, and the body of a Snook, hence the name. They are found along the coast of South Florida and larger Caribbean islands, with highest populations near the Everglades. Like most other Snook, this species is able to live in both freshwater and saltwater habitats. Tarpon Snook can grow up to 15 inches long and are known to put up one heckuva fight!

Fishing for Snook in Florida

Anglers are able to hook a Snook on both coasts of Florida, which is why they are a favorite throughout the Sunshine State. While they are rare in the Panhandle and Northeast Florida, it is possible to catch a Snook in these areas. Travel to Southwest Florida (), or try the Intracoastal Waterway on the East Coast and you’re sure to find yourself a healthy-sized Snook. You can fish for Snook twelve months of the year, using both artificial and live bait, though they get lethargic in cooler water. Techniques also vary from fly fishing, drifting, sight fishing, to even trolling. Fishing during spawning months will result in larger size and numbers. Snook spawning season typically spans the months of April to October, with peak activity occurring during July and August. Snook like to feed near structures such as bridge or pier pilings, or submerged tree roots near the shoreline. There are strict regulations for harvesting Snook, so make sure to release any undersized or out of season catch. If you do end up taking a fillet or two home, grilling them with olive oil and garlic is a delicious choice.

There are a bunch of nicknames for Snook: linesiders, robalo, and sergeant fish. But whatever you call them, don’t call them poor quality. Each species of Snook are highly sought after for their aggressive fights and tasty fillets. If you’re not sure where to begin for your Snook fishing trip, hire a local fishing guide who can get you on the action. and reserve your next trip with a deposit. It won’t matter what kind of Snook is at the end of your line, you’ll have a great day reeling in your next catch!