Lake Michigan King Salmon Fishing: What You Need to Know 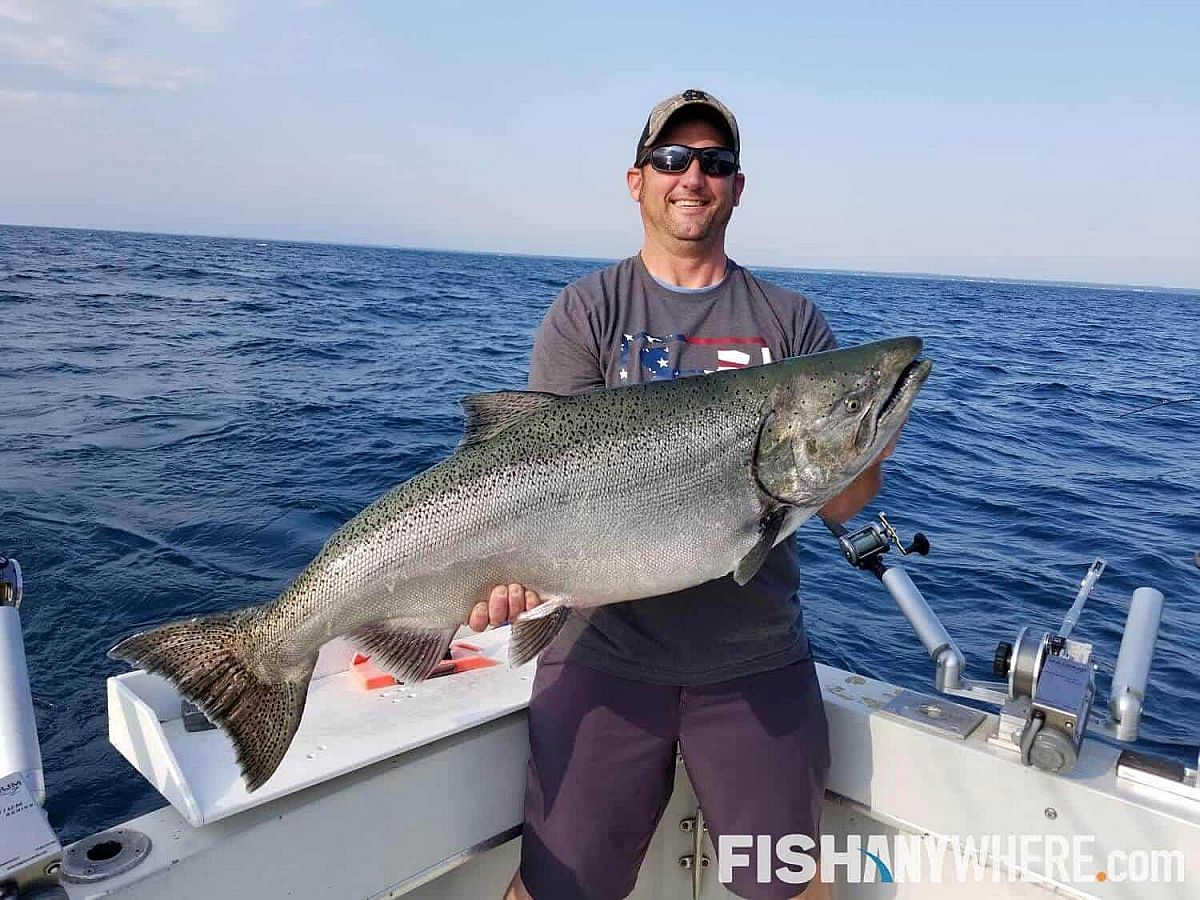 The Chinook, or King Salmon, is a bucket list fish for many anglers, especially those who have spent most of their time fishing up north. Its royal nickname is derived from its size, with the King Salmon being the largest species in the Pacific Salmon family.

These fish are found throughout the North Pacific, most commonly out of Alaska and British Columbia. You may be wondering why we are discussing a "Pacific" salmon in an article about Lake Michigan.

In the 1960's, the Michigan Department of Conservation (which would go on to become the Department of Natural Resources) was facing a dwindling commercial fishery in Lake Michigan. The invasive Alewife fish was growing in numbers, and eating native, baby trout.

Looking for a way to not only revive the existing fishery through controlling the Alewife population, but also turn the lake into a sport fishing destination, they conducted research concluding that the conditions in Lake Michigan would be well-suited to the King Salmon. As such, the fish were introduced to the lake by man.

This has since proven to be extraordinarily successful, eventually converting the declining fishery into a multi-million dollar sport fishing industry, particularly on Lakes Huron and Michigan. Anglers visit the Great Lakes from around the world for the beautiful scenery and King Salmon fishing, boosting local economies. This is an important fish.

Why Fish for King Salmon?

The King Salmon grows large, up to 30 pounds or more in Lake Michigan, and fights very aggressively. Nothing gets an angler's blood pumping like a rod bending, drag screaming battle. This makes it a prime target for sport fishermen. Most notably however, they make for incredible table fare, topping many "favorite fish" lists.

When to Fish for King Salmon on Lake Michigan

The peak of the Lake Michigan salmon fishing is in the summer. The fish start showing up in the deeper water from May to early June, and the action really starts heating up during their run in July to September, when the fish make their way back to the rivers they were hatched in. The fishing continues through October, but typically tapers off in November.

How to Fish for King Salmon on Lake Michigan

Deep water trolling is by far the most popular technique. Downriggers are employed to keep the bait at a desired depth, typically half the depth of the water you are fishing. For example, if you are in 50 feet of water, adjust the downriggers to keep the bait around 25-30 feet. The Alewife (the invasive species that the Salmon was introduced to the lake to control) makes a great bait, but anglers who would prefer to use artificials will troll spoons.

Anglers without access to a boat or charter service are not out of luck. During the peak run, it is not uncommon for Salmon to be cruising near the lake's jetties, piers, and harbors. Catching a King Salmon from shore on a light spinning setup is an unforgettable experience!

Are There Other Salmon Species in Lake Michigan?

Although the King Salmon takes the crown, Coho Salmon are another prime target in Lake Michigan. They do not grow as large as the Kings, but still fight hard for their size, and can be found in abundance during their run in October and November.

Coho are also delicious, and their later run gives anglers an additional couple of weeks of great salmon fishing before shutting down for the cold season.

Aside from the Kings and Coho, Lake Michigan anglers can also encounter Pink Salmon and Atlantic Salmon. The Pink Salmon is smaller, typically growing to a couple of pounds. Atlantic Salmon are larger, and known for their fighting ability, but they are less common to encounter on the lake itself. The main fishery in the Great Lakes region is the St. Marys River.

When the summer fishing season comes around, there's no excuse not to get out and try your luck at catching a King. It doesn't matter whether you're using artificial bait, live bait, or you're just dropping a line off the pier; Lake Michigan King Salmon fishing is an experience that every angler should have! Search for a Lake Michigan salmon fishing charter today.