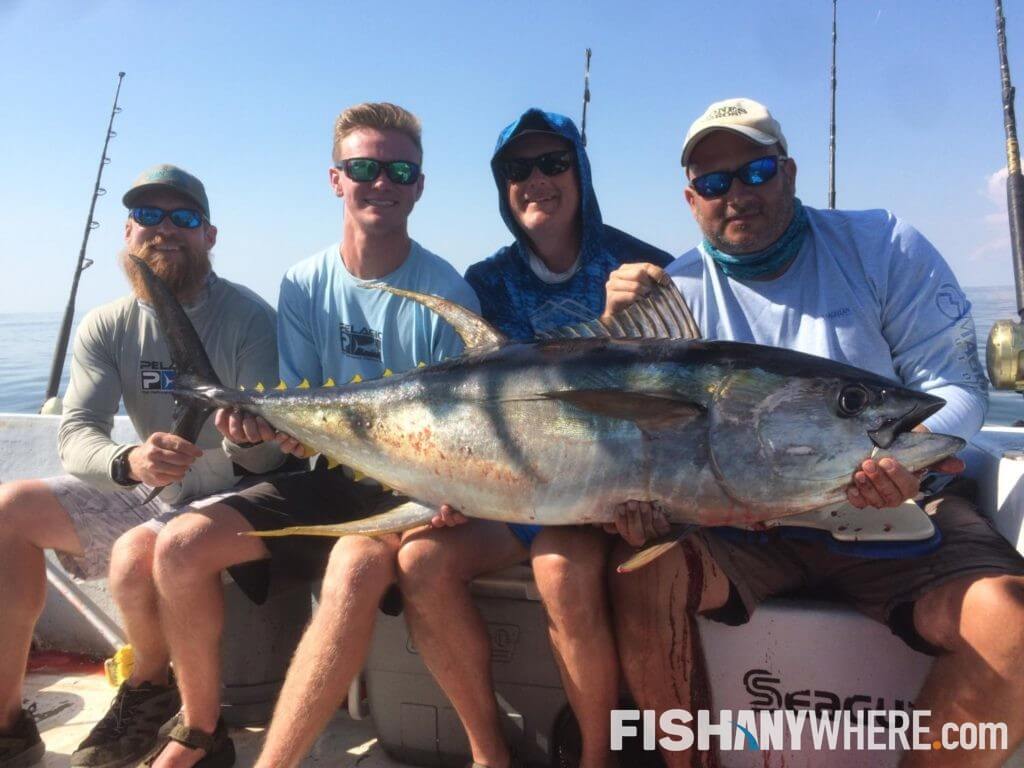 While many anglers head to Venice, Louisiana for the inshore fishing opportunities, the offshore fishing is equally responsible for the city’s status as an international fishing destination. When you travel beyond the Mississippi Delta and into the Gulf of Mexico, there’s even more trophy-sized fish waiting for you to drop a line or two.

As nutrients from the Mississippi River flow into the Gulf of Mexico, it creates a fish habitat like no other. Add the many nearby oil rigs, reefs, and canyons in the area and you’re looking at an angler’s heaven. It’s a perfect storm of sorts for some of the best fishing in the world.

The #1 species on everyone’s minds when fishing offshore Venice is without a doubt tuna. Specifically, yellowfin tuna and blackfin tuna. Throughout the Gulf, yellowfin can measure anywhere from 50 to 120 pounds. They are torpedo-shaped with dark blue on the top, silver on the bottom, and a yellow stripe along the middle. They get their name from the dorsal fins that are also bright yellow.

Blackfin tuna are typically easier to find and catch than yellowfin, but they still offer great fishing opportunities. Other deep sea species include blue marlin, white marlin, mahi mahi, sailfish, and wahoo. Oftentimes anglers will be targeting marlin or mahi and end up with a tuna on the line instead.

Billfish in particular (marlin and sailfish collectively) are on just about any saltwater angler's bucket list. They use their speed and strength to peel drag and explode out of the water to toss the hook. Watching the acrobatics of billfish is unlike anything else you’ve ever experienced.

Wahoo are as tasty as they are fun to catch. Comparable to sashimi-grade tuna, eating freshly caught wahoo is just about as good as it gets. And getting them to the boat is just as exciting. Trolling for wahoo is usually at speeds of 14 to 18 knots, a big difference from the typical 6 knot trolling trip. They are unbelievably fast in the water, and you’ll need to match their speed to get the bait close.

Trolling is a technique used by many professional and recreational anglers throughout the Gulf. The idea is that there are several lines in the water with bait at varying depths and the captain pilots the boat across the water. This allows the anglers to cover larger areas more easily, while improving chances of a hit with multiple lines and baits out. It’s a technique that’s simple to understand, but difficult to implement. The speed of the boat is imperative for a successful outing, and is largely dependent on the fish you are targeting: Too fast and you could miss your target, too slow and the fish simply aren’t interested. All species previously mentioned (tuna, marlin, mahi mahi, etc.) are caught with this technique, and it's practically a requirement for wahoo and billfish.

Bottom fishing is another technique implemented by Venice offshore charters. This technique is used near reefs to target bottom feeders such as snapper and grouper. Red Snapper is a popular species throughout the summer months when the season is open. The season varies from year to year, so make sure to check with your captain if you’re interested in fishing for red snapper. Other bottom fishing favorites include black grouper, gag grouper, tripletail, and flounder.

If you want to stay a bit closer to shore, Venice has plenty of nearshore fishing opportunities as well. Species such as cobia, amberjack, mackerel, and grouper can all be found within 9 miles of the coast. Both bottom fishing and trolling techniques are used in this area and trips typically last four to six hours.

Cobia is a popular species, simply because it’s a beast of a fish. They can grow as large as 30 pounds, and use every inch of muscle to fight. Cobia have a compressed head and often trick anglers to think they’re sharks. The lack of fin will be the first give away. But be careful when you boat your cobia, if they are “green” (or not worn out) they tend to cause havoc onboard. Let them run and tire themselves out before landing them.

Whether you’re looking for an offshore adventure, or something a little closer to shore, the guides and charter captains of Venice, Louisiana know how to put you on the fish. They are professionals with years of experience and a job they love. They especially love teaching new anglers, so don’t let lack of experience hold you back. And if you’re an old-timer, you know how to swap a good fish story with the best of them!

Grab your cooler and sunscreen, and of course the camera, and hop aboard for the excursion of a lifetime. Find a Venice fishing charter that can accommodate your group at the best prices on FishAnywhere.com - it’s just a click away!