Florida's amazing fisheries draw anglers from around the world. From bonefish to marlin, the range of species and fishing techniques that can be used to catch them are seemingly endless in these waters. One staple is deep sea fishing for Snapper. Their abundant population, scrappy fight, and amazing table fare make them a top target! Not all snapper are created equal however. Learn more about the top 9 snapper species in Florida. 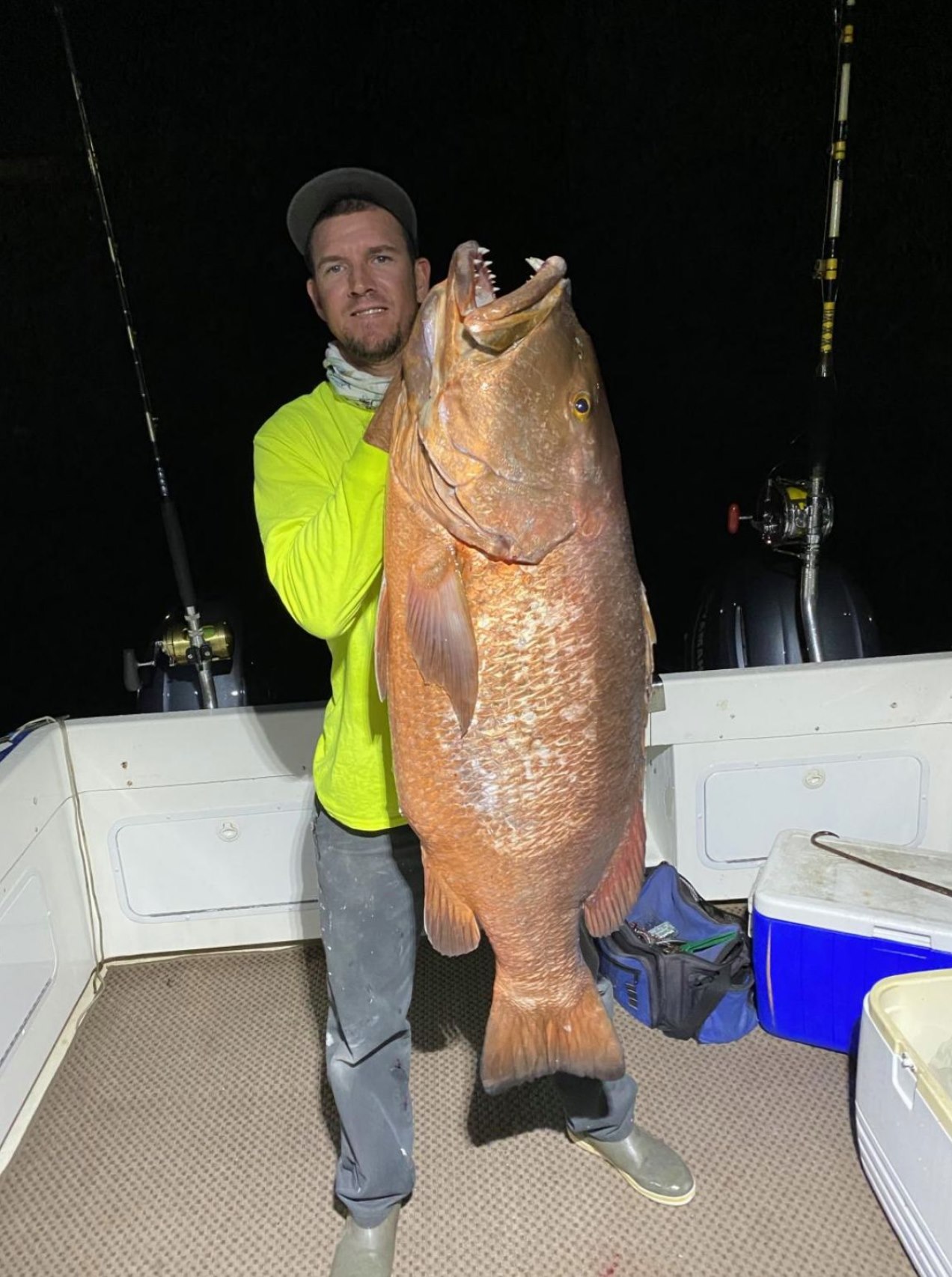 The Cubera is the largest of the snapper species, growing to five feet long and 120 pounds. They are a grayish red in color, which often leads to confusion between juvenile Cuberas and Mangrove Snapper. They are rarely found north of Florida, and are much more common in the Atlantic than the Gulf. Although they make for great eating, larger specimens are more likely to contain parasites or can cause ciguatera poisoning.

Lane Snapper are among the best tasting, with their crustacean-focused diet lending a sweet flavor with firm texture. Although the are on the smaller end of the range, usually around 14 inches, they are abundant on reefs and wrecks. They are most common in South Florida, however they can be found throughout the state's waters. They can be identified by their pinkish-red color, and horizontal yellow stripes. 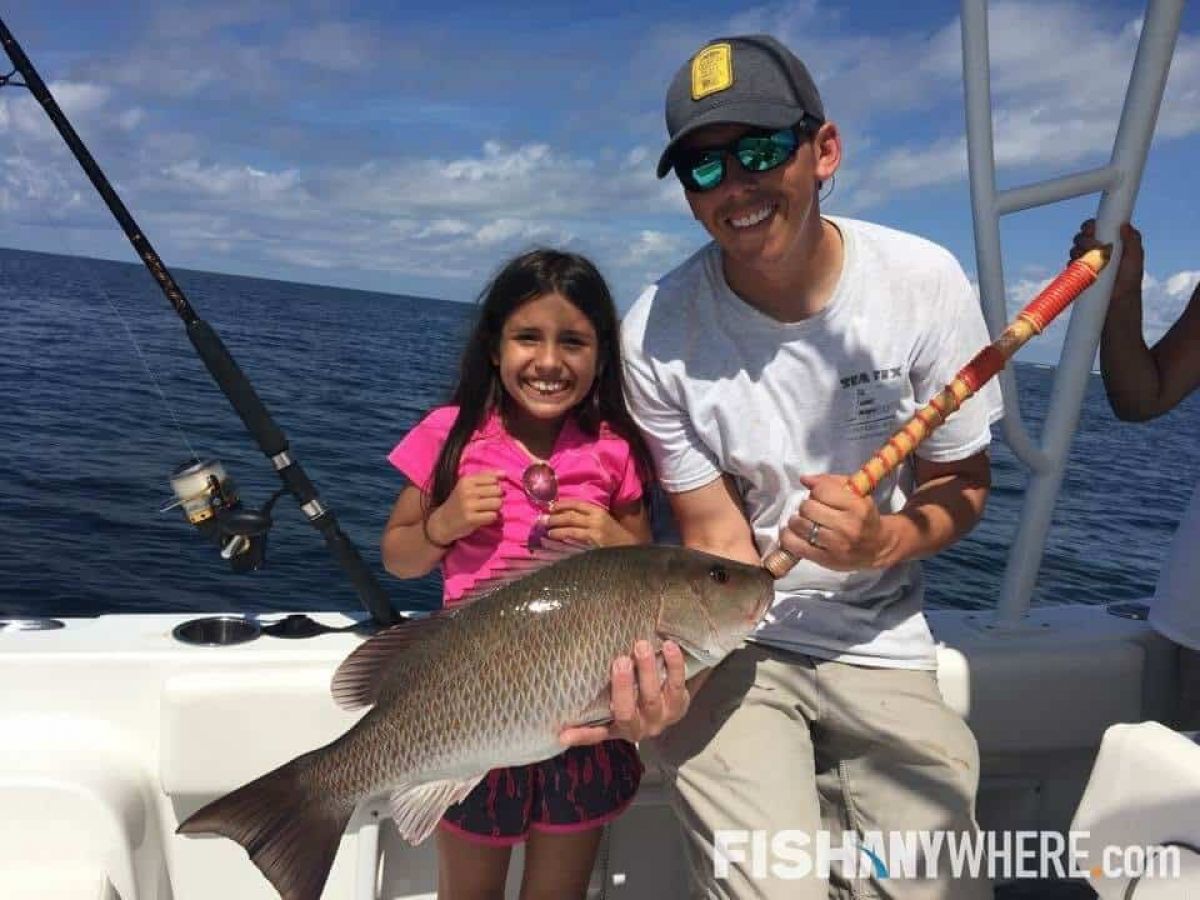 If you grew up fishing in Florida, a Mangrove is likely the first snapper you ever caught. These fish are very accessible, schooling around bridge, dock, and pier pilings. Most Mangrove Snapper will run between 10-20," however they can grow to nearly 50 pounds offshore! These have a color pattern similar to the Cubera, reddish gray, with a lighter belly. Always check the latest regulations before deciding to keep any fish, but the Mangrove Snapper typically has a generous year-round limit. 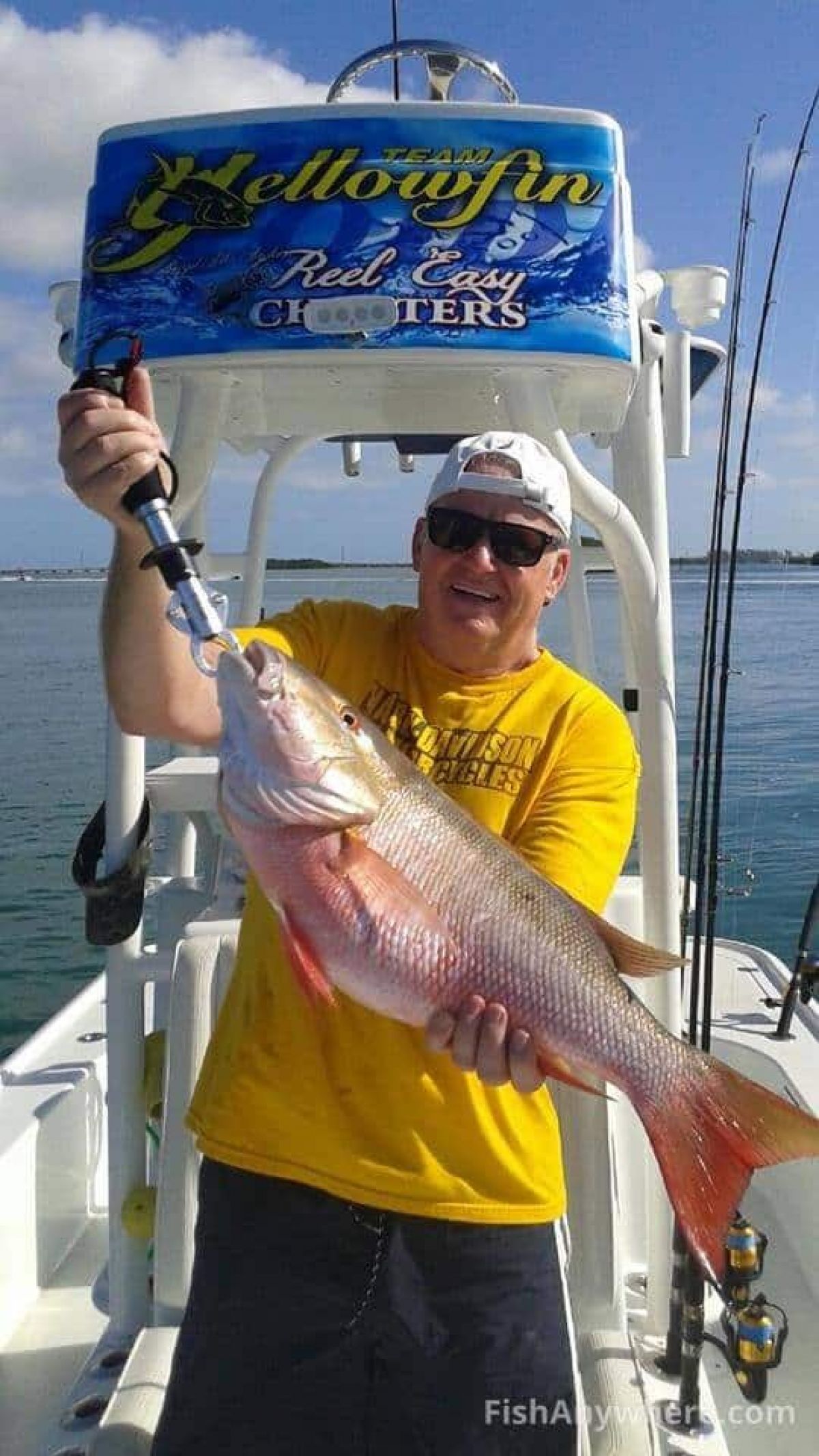 The Mutton Snapper is one of the most popular snapper in Florida waters, growing to a maximum size of about 30 pounds. Muttons are most commonly found in about 80-300 feet of water, although juvenile populations exist near beaches, in mangrove canals, and around dock pilings. They are pinkish red on their belly, with a golden orange coloration on their back. Younger Muttons may have vibrant blue horizontal lines, and a prominent black spot on their back as well. 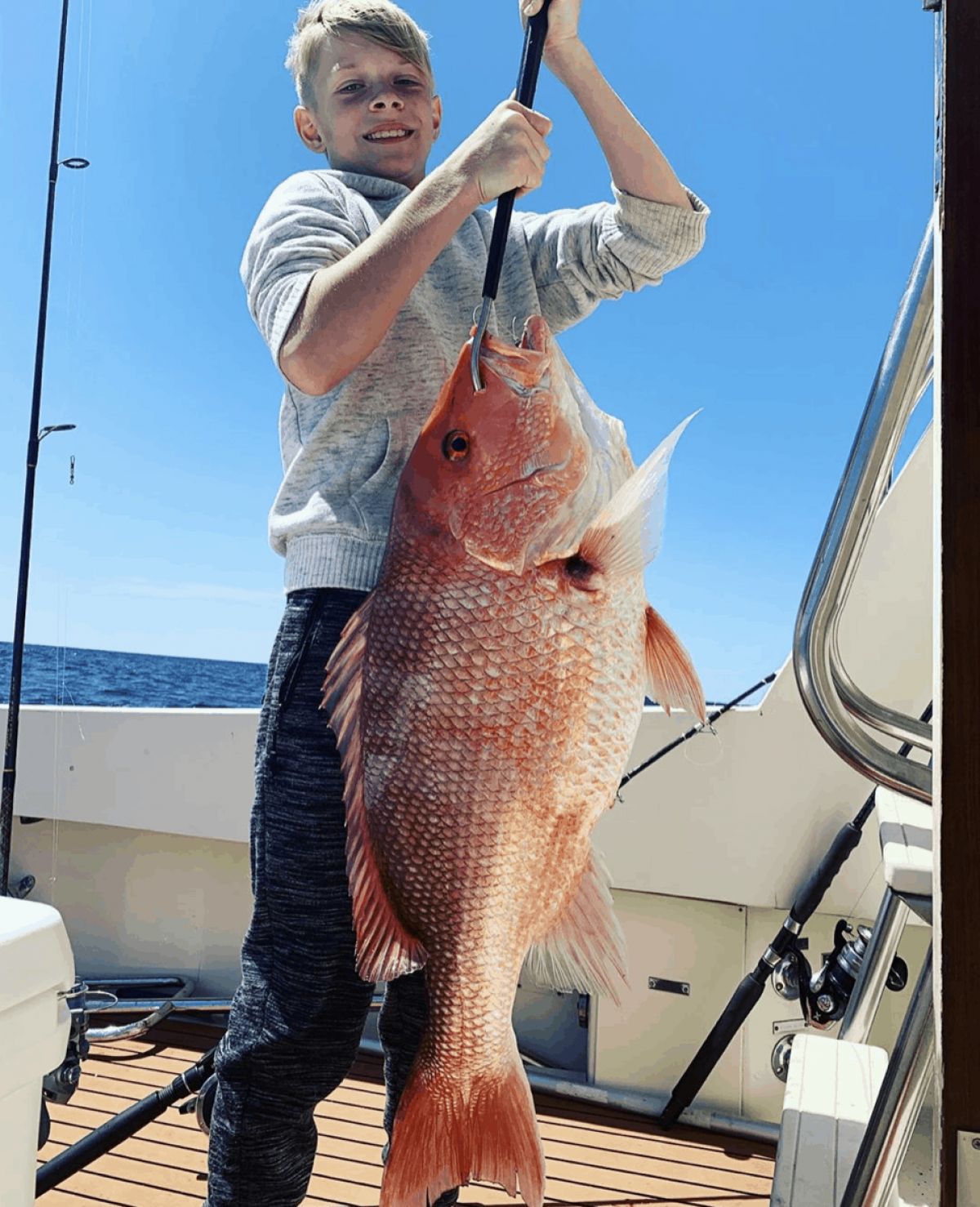 Given the name. it is no surprise that the Red Snapper is primarily a rosy red color, with lighter pink to white towards its belly. They are caught in all of Florida's waters, but become more common as you head north. Most caught will be 5-8 pounds, with 20+ pound fish somewhat common on offshore reefs, and a max size approaching 50 pounds. They are renowned as one of the best eating snappers, and are the typical snapper offered at restaurants and markets.

Also known as "mingo" or "beeliner," the Vermilion Snapper features a reddish pink color, similar to red snapper, with large red eyes. Compared to Red Snapper, Vermilion are more slender and streamlined in shape. They are a smaller species, growing to about 24" and six pounds, with most being caught in the 2-3 pound range. They are most commonly caught offshore over wrecks and reefs. Although they may not yield filets as large as their Red Snapper cousin, Vermilion make for delicious table fare. 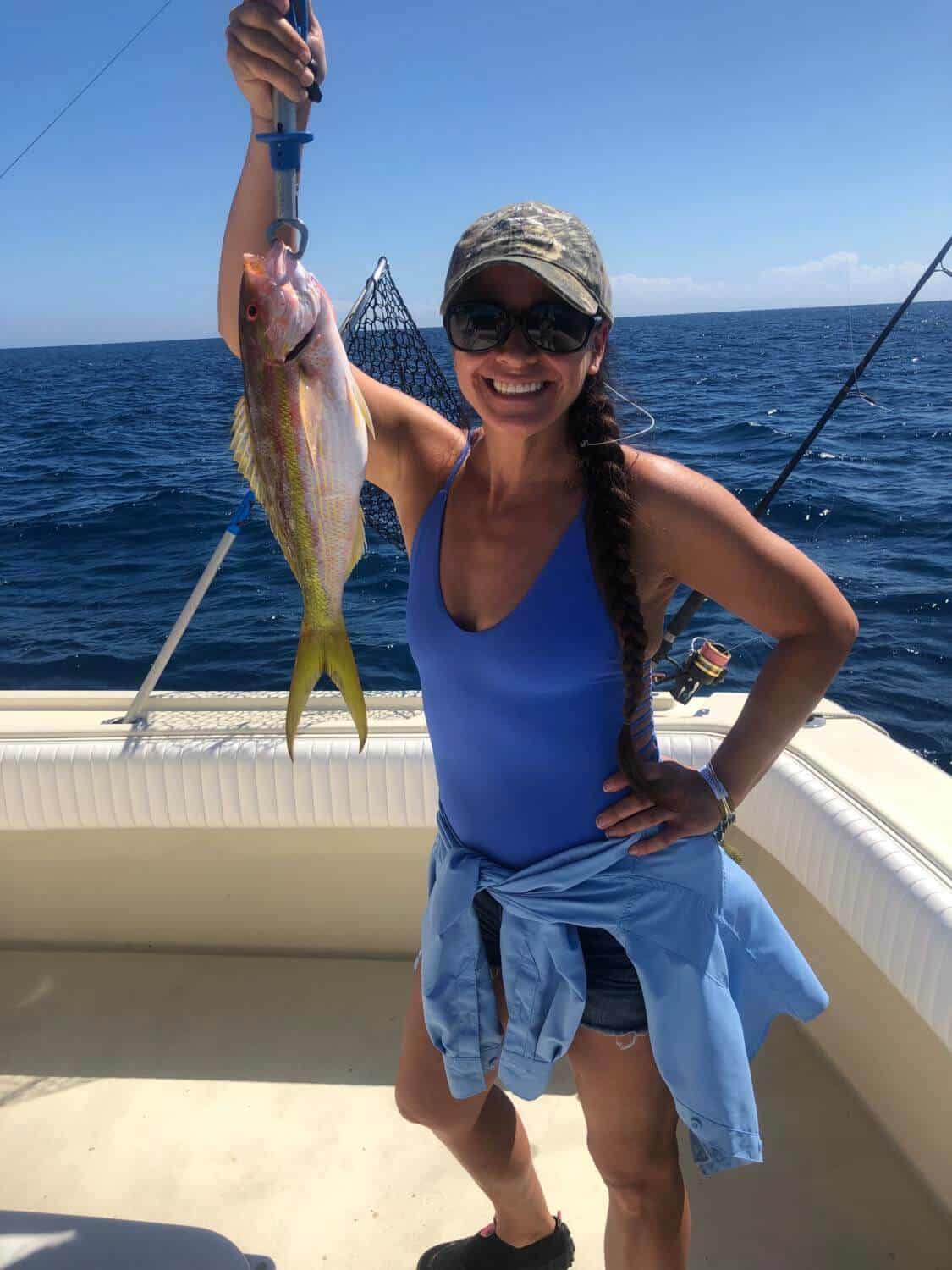 The Yellowtail Snapper is identified by a light olive colored belly, bluish black upper body, horizontal yellow stripe, and of course, a yellow tail. Another smaller species, Yellowtail top out around 5-6 pounds. They are most common in South Florida, with the Keys offering the best fishery. Their smaller size and abundance makes them a great target for kids and beginners, and like most snapper, they are delicious!

Silk snapper are most common in South Florida and the Keys. They live on reefs and structure in very deep water, typically 400-600 feet. They have a pinkish red coloration similar to the Red Snapper, however the Silk Snapper has a distinguishable yellow eye, while the Red Snapper's eyes are the same pinkish red color of their body. Silk snapper do not grow very large, with most catches being in the 20 inch, 5 pound range. Although they provide amazing food quality, their depth keeps them from being targeted frequently by recreational anglers. Specialized equipment such as electronic reels are required.

The Blackfin Snapper is very similar in appearance to the red snapper, with a black crescent "spot" on the pectoral fin distinguishing the Blackfin. Their large eyes are also more of an orange or amber color, whereas the Red Snapper's eyes are pinkish red. They can be caught in the Gulf or the Atlantic, becoming more common the further you head south. They live in sandy or rocky bottom areas, typically near ledges and drop offs, in about 200-300 feet of water. Keeping the theme alive, Blackfin make for excellent table fare, and are frequently sold as Red Snapper at markets and restaurants.

The different types of snapper in Florida are all delicious and worth catching. Although the Red Snapper may be the most sought after, there are many other options to choose from when you head out on your next fishing trip. Different species live in different depths, so be sure to do some research before heading out with a specific target in mind, and don't forget to check the latest regulations and limits. Ready to book your next snapper fishing charter? Find the perfect trip at FishAnywhere.com!