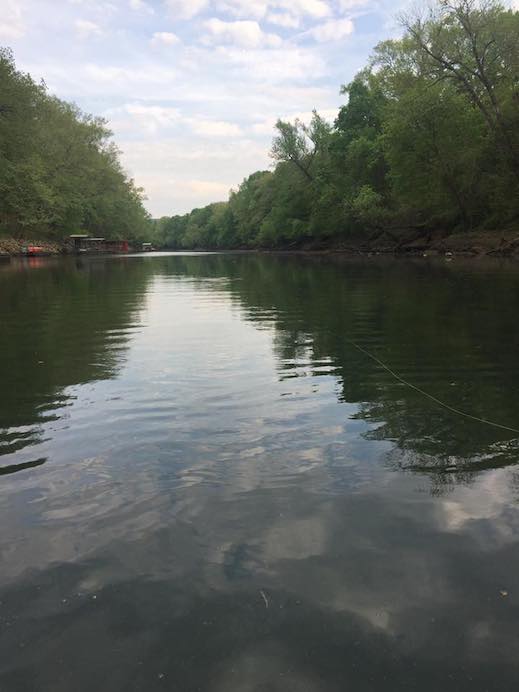 The Little Red River is a 102-mile-long river meandering through five Arkansas counties. While many bodies of water boast a long list of possible targets, this fishing stream is about one thing — trout. The Little Red River is known for its big brown trout, but it also has rainbow, brook and cutthroat trout in it’s clear, cold water that comes out of Greer’s Ferry lake. The water is cold — about 47 degrees almost all year round — but the fishing for trout is hot. The river is in central Arkansas in rural White, Van Buren, Searcy, Stone and Cleburne counties. The Little Red River is on almost any trophy brown trout fisherman’s bucket list. The waters held the world record brown trout for years at 40 pounds and four ounces. While that is the exception, there are also browns over 8- 12 pounds caught on a regular basis. 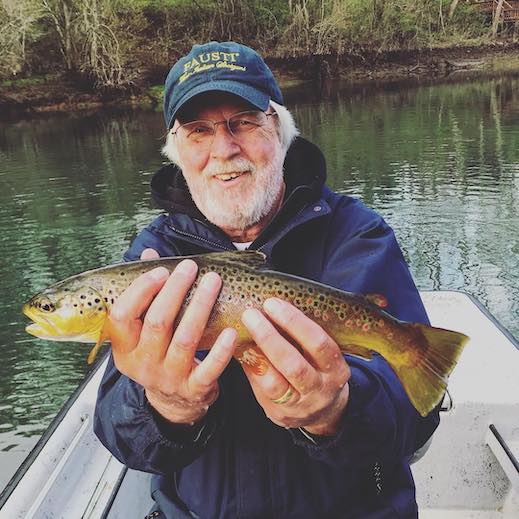 Fishing on the Little Red is popular by boat and by wading from the bank. The upper 30 miles of the river are the best for trout fishing and the target of most stocking efforts in the stream. The US Fish and Wildlife Service maintains a trout hatchery just below the dam and releases large numbers of mature trout regularly. There are some efforts to restock other gamefish like bass, walleye and smallmouth bass in the lower ends, but because of the extreme cold water all year long, the effort has been difficult. So, it’s the brown trout, rainbows, brooks and cutthroats that are the main fishing focus. The Little Red runs from Greers Ferry Dam to the White River near Georgetown. Where the Red meets the White is within the Henry Gray/Hurricane Lake Wildlife Management Area south of Augusta in White County. Spring and early summer finds the river crowded with anglers along the many shoals of the river. Fishing is good then, but most will agree that it is in the Fall that fishing actually hits the peak. That is when the brown trout migrate upstream to spawn from mid-October up until the middle of December. During that time, the fish can be found in more concentrated numbers and they are eager to feed. The river has an abundant supply of natural bait including scuds, freshwater shrimp, snails, leeches and sowbugs. Fly fishermen try to mimic the natural bait with their artificials based on the seasons and abundance of that kind of bait. The upper sections of the Little Red have several full service marinas, resorts and access to fishing guides and equipment. Public and private resort launch areas are located on both sides of the river. Attractions in the area include the William Carl Garner/Corps of Engineers Visitor Center, hiking trails overlooking the river and the trout hatchery. While the browns get the attention of trophy fishermen, stocked rainbows provide the biggest numbers of fish. Here are some simple tips for fishing the river. First, if you are in a boat, use extra care especially in areas with current. When the river is calm, fish the deeper parts of the stream or just below the riffles. If you are on the bank, look for deep water where there are overhangs in the channel or small, still pools. Understanding how trout feed helps you catch more. The fish usually take the bait off the bottom, but you’ll catch more if you float the bait just off the bottom. There are two popular ways to do this. First, you can attach a miniature marshmallow on the end of the hook or you can use a hypodermic needle to inflate nightcrawlers. Natural baits like nightcrawlers, redworms, wax worms, crawfish, sculpins and minnows work well as do corn, salmon eggs and commercial dough ball baits. You can use artificial lures like small spoons, spinners, jigs or even crank baits. 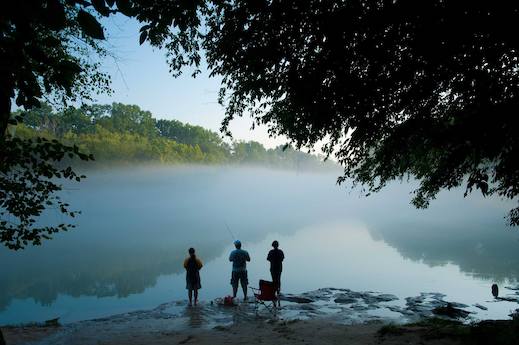 There are ten public access areas built and maintained by the Arkansas Game and Fish Commission and U.S. Army Corps of Engineers on the trout portion of the Little Red. Detailed maps are available from the Arkansas Game and Fish Commission. Access areas include the JFK Park Access (Damsite Catch and Release and Wheelchair Access); Collins Creek Access (Youth Catch and Release); Cow Shoals Access (Seasonal Catch and Release and Walk-In Access); Barnett/Winkley Shoals Access; Libby Shoal (Walk-In Access); Lobo Access; Dripping Springs Access; Pangburn Shoal Access (Wheelchair Accessible); Ramsey Access and Monaghan- Womack Access. The first area listed, JFK Park, was named after former President John F. Kennedy. Kennedy dedicated Greers Ferry dam just weeks before he was assassination in 1963. The Collins Creek area is a project by the Arkansas Game and Fish Commission, U.S. Army Corps of Engineers and the Arkansas Fly Fishers that has rejuvenated the old intermittent streambed into a spawning stream for rainbow and brook trout for young anglers. Although trout are mostly small here, it is a great place to take youth to fish, hike or just enjoy the area.