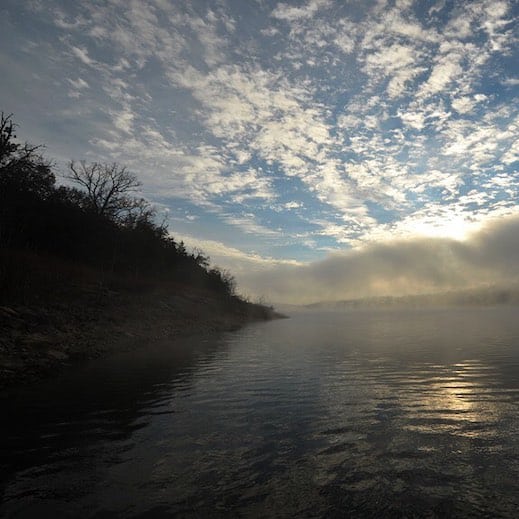 There may not be gold in those Ozark Mountains in north Arkansas. But there is at least one Ozark Mountain jewel. That is the 22,000 acre Norfork Lake, located near Norfork and just a short 15-minute drive from the quaint country town of Mountain Home. Mountain Home also houses the Ozark Folk Center State Park. One promotional piece about this lake describes it as “Awesome in its dimensions and complexity, the beauty of the Norfork Lake lies in the heart of the Ozark Mountains”. In other words, it’s a pretty place to visit with lots of things to do, including catch fish. And at least one species that may surprise anglers. It’s named after the North Fork River. The river and its tributaries feed the lake and the fresh, clear waters are home to bass, walleye, crappie, bream and catfish. And they’ve been there a while, Norfork is the oldest of Arkansas’s large man-made impoundments that has consistently produced a variety of fish. 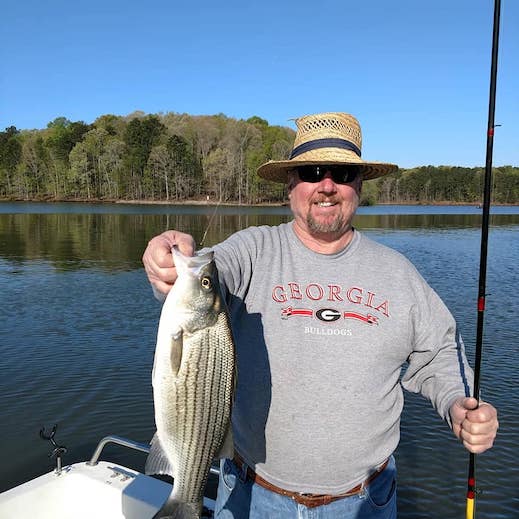 Stripers grow two pounds a year here and many in the 30-pound range are caught every year. You don’t have to go further north and wait for the lakes to thaw to catch walleye, either. Norfork has an excellent population of them. Largemouth bass structure isn’t great on this lake, but the fish do just fine and draw numerous anglers and tournaments to the lake’s waters. Black bass fishing is at its best from September through May. And the crappie fishing is hard to beat. Strict management of those fish here makes it one of the best big crappie lakes around. Below the lake’s dam, the North Fork River is a popular and trout fishing stream fed by the Norfork National Fish Hatchery. A state record 4-pound, 12-ounce brook trout was caught there in recent years. The terrain that makes up Norfork is basically a winding river channel with more than 300 miles of shoreline running from southern Missouri at Tecumseh to the dam near Norfork, Arkansas. It’s a narrow lake, one you can see across from all points. The many coves, inlets, creek arms and main lake points provide the basis for the variety of fishing species and structure. Except for the bottomland areas, this was steep and rugged territory before being flooded. When the lake was built, all the trees were cut and removed, leaving the only natural structure as rock formations and natural contours, ledges, flats and gravel beds. Local anglers are allowed to sink their own structure by permit and there are hundreds of brush piles in the lake. Knowing where these brush piles are is a great advantage to fishermen. You can look for fish many different ways on Norfork Lake, but one way is easy even for beginners. Just look for the signs. Not water temperature or wind direction or visible structure. The signs. The blue and white ones that dozens of underwater fish structures placed by the Arkansas Department of Game and Fish. Each pile is marked by a blue and white fish sign on nearby trees or poles. Some of the structures are nearly as long as a football field. One of the best kept secrets here is the walleye fishing. The cold, deep waters are excellent habitat and the fish are stocked almost every year. There are also great natural spawns which have boosted the population. One of the top ways to catch them is slow trolling and long lining with very small jigs, similar to how anglers catch crappie. Regular worm rigs, bottom bounces and small jigs tipped with minnows work. Crappie fishing is good in shallow waters during the spring season, and around structures most of the rest of the year. The Fall is a great crappie fishing time as they school up around brush piles. Crappie must be at least 10 inches long to be kept and the limit is 15. That strict management helps the lake regularly produce slab crappie. Fish in the 14-15 inch range are common. 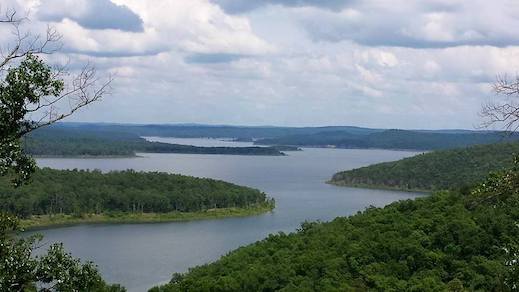 There are 19 U.S. Army Corps of Engineers parks that provide camping and access for water sports. Boating, water skiing and swimming are popular on the lake. Commercial docks on the lake have boats, motors, guides and equipment for hire. In addition to parks for camping, there are many resorts offering accommodations, some with private docks, swimming pools and other recreational amenities. Going diving is also popular on Norfork. There are nearly 30 dive points, including an old dynamite shack that was used in dam construction, an underwater cave, an old school bus attached to a barge that was once a houseboat and large rock formations.