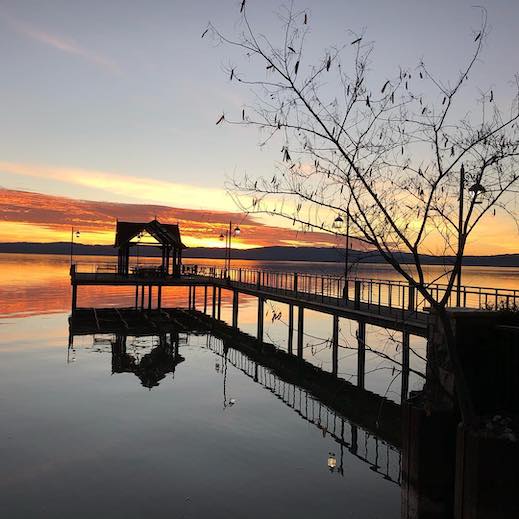 Part of the fun of fishing is trying to figure out what species to go after and debating which one is the best. But when it comes to Clear Lake in California, there’s little to think about or debate. There’s no doubt what the No. 1 target species is here on this California lake. It is largemouth bass. Big largemouth bass. Until somebody can prove differently, Clear Lake can lay claim to being the “Bass Capital of the West,” and proving that isn’t true will be hard to do. Catches from the lake prove it week in and week out and the lake has been placed at the top of most publications’ lists of the best western bass lakes and in the top 10 in the United States. Located north of San Francisco and northwest of Sacramento on the edge of the Mendocino National Forest, it is the largest natural freshwater lake in the state covering 68 square miles. That is a total of 43,785 acres for anglers to fish. Clear Lake supports large populations of bass, crappie, bluegill, carp and catfish, but more than 50 percent of the total fish caught in Clear Lake are largemouth bass. The lake record is 17.52 pounds. The lake’s favorite fish also have a favorite hiding place, the many tules (pronounced tulles) that grow along much of the shoreline. Pockets and points along the tule beds are great ambush points for feeding largemouths. There is good bass fishing from one end of the lake to the other. Popular spring spots include the Lakeport area and the shoreline there around Berger Bay. 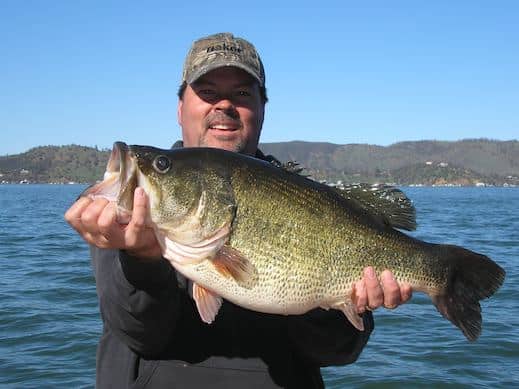 Summertime moves the bass to more shade and that can be found under boat docks, marinas and near shoreline trees. Some popular spots include Point Lakeview and Baylis Point and Jago Bay. Fishing is good around Shag Rock and Rattlesnake islands as well as Redbud Park, Library Park, and Lakeside County Park. Also try Horseshoe Bend and up Rodman Slough near the bridge. Just about any bait will catch bass on Clear Lake, but there is one hot lure for the big bass these days — large plastic swim baits in sizes from six inches to a foot long. The bigger the bait, the bigger the bass. Jerk baits and rattling minnow type lures work as do jerkbaits, drop-shot worms, shaky head jig and worm. The diversity of lures and techniques that catch bass is a drawing card to this lake. There also seems to be an abundance of bass in shallow and deep areas of the lake. One rule of thumb for the lake is if you want to fish deeper structure, fish the lower end. If you want to fish shallow structure, fish the north end. The north end is mostly shallow and runs through an area called the Narrows, around Buckingham Peninsula and into the deeper waters of the south end. There the lake splits into Cache, Kelsey and Adobe creeks and Rodman Slough. Long stretches of the banks include aquatic vegetation, fallen timber, boat docks and rocks. These areas are also more protected from wind. Much of the fishing industry on Clear Lake was built several decades ago around crappie, which were much more popular as a gamefish than bass. That is mainly true because of their taste. Crappie fishing fell off for a while, but is making a comeback. They are the huge fish here. Clear Lake still holds the state record for white crappie, a 4-pound, 8-ounce lunker. In Clear Lake, 2- and 3-pounders are common. Light tackle with plastic spinners, minnows and small meal worms are good baits. Fish usually roam around in schools and are prone to going to deeper spots around marinas, islands and boat docks most of the year. They can be caught in shallow waters around almost any kind of structure in the spring. The black crappie is the most consistent and populations of white crappie seems to be cyclical. 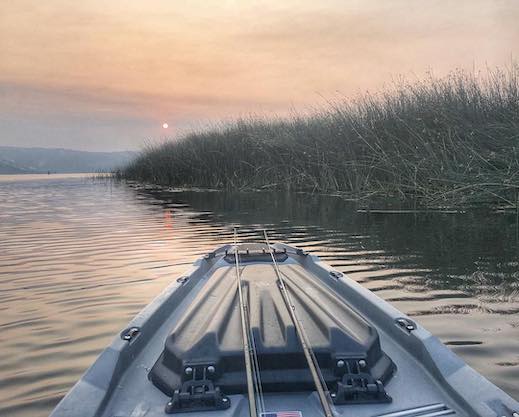 The lake isn’t a model of solitude. It’s massive water area and warm water makes it a favorite for all kinds of watersports and the lake can get quite busy with people swimming, skiing, wakeboarding, jet skiing and sailing, especially on weekends from visitors and lake residents. There are 11 public boat launch ramps on the lake and several private marinas and fishing tackle stores. This lake is a hotspot for fishing tournaments as well. There are 11 public boat launch ramps on the lake. Good facilities are also available at Clear Lake State Park. When the fishing day is done, there is plenty for anglers to do, like visiting tasting rooms of the many wineries here north of Napa Valley. Some of the most well known include Guenoc and Langtry Estate Vineyards and Winery, Steele Wines, Brassfield Wines, Vigilance Wines, Six Sigma Winery, and Wildhurst Vineyards.