Nestled among the mountains, tropical rainforests, and the vast Pacific Ocean is Quepos, Costa Rica. This harbor town is a gateway to some of the best sportfishing in the world. It also has a front-row seat to the Manuel Antonio National Park, a place to hike, swim, zipline, shop, eat, and spend the day with your family. Located in central Costa Rica on the coast of the Pacific Ocean, Quepos is a tropical paradise. If you draw a straight line from San Jose to Quepos, it’s about 60 kilometers (or 38 miles) from the country’s capital. However, to travel this distance by car one must drive around the mountains. It’s a two and a half hours drive through the most beautiful country to this vacation paradise. Once in town, plan on not planning anything. It’s a “take the day as it comes” kind of place. There are shops to visit, restaurants to patronize, and adventures to be taken. If you’re an outdoor enthusiast, this is the perfect place to visit. Of course, there’s the Manuel Antonio park, along with horseback riding, ATV tours, birdwatching, and the nearby Manuel Antonio Butterfly Botanical Gardens. But what people really travel to Quepos for? Simply stated: fishing charters. Even visiting the Marina Pez Vela is a favorite tourist attraction. The unique landscape is worthy of at least a few pictures. But once you’re out on the water, you’ll see why fishing in Quepos is a bucket-list-worthy adventure.

The world record snook was caught just off the coast of Quepos in 2014. It weighed 59 pounds, 8 ounces at a length of 47.6 inches. The previous record was 57 pounds, 12 ounces caught in 1991, also from Costa Rica. If you’re unfamiliar with snook, the average size of snook in Florida is typically 15 pounds. It’s easy to see why local Quepos anglers enjoy targeting this species. Snook, also known as linesiders, are silver colored with a black stripe running from head to tail. They are sleek and incredibly strong, using their weight to fight the line back to the boat. If you’re familiar with largemouth bass fishing, it’s very similar to that experience. It’s a thrilling experience and often results in some amazing pictures. Another favorite Costa Rica inshore species is the roosterfish. It’s arguably the number one species targeted in the area. Roosterfish are very unique looking fish, with spindly dorsal fins that resemble a rooster comb, hence the name. They are found from just off the coast to more than 3 miles out in waters 150 feet deep. When fished near reefs, they typically grow to over 50 pounds; those closer to the shore are generally smaller. Other inshore species available when fishing Quepos include jack crevalle, Spanish mackerel, red snapper, and grouper. Trips typically run at least five hours long. Or your group can reserve a full eight-hour charter. Captains will fish the shores of Quepos, Manuel Antonio, as well as local rivers and inlets. 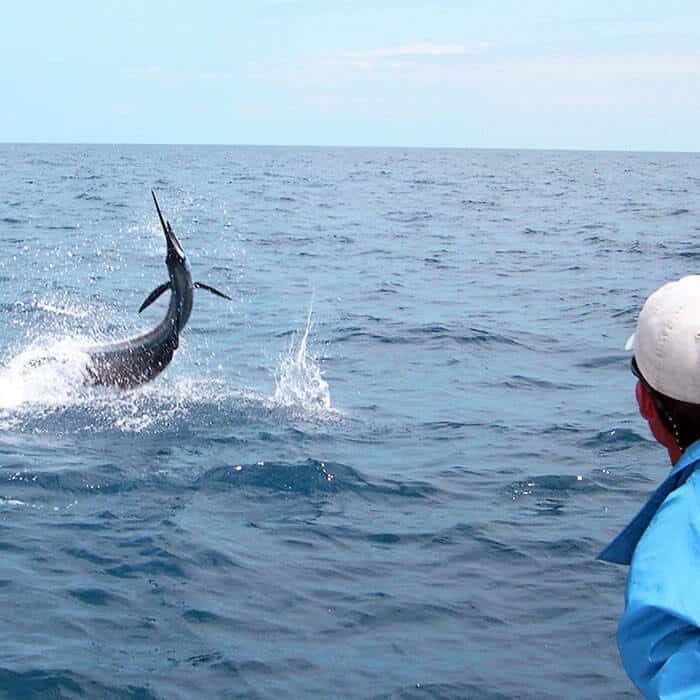 While Quepos inshore fishing is productive and a ton of fun, the offshore fishing in Costa Rica is simply off the charts. The deep-sea fishing of the area is what brings anglers from all over the world. Offshore species awaiting your arrival include marlin, sailfish, wahoo, tuna, amberjack, and mahi-mahi. There are different marlin species available throughout the Pacific Ocean. For a really great and challenging adventure, try going for a Grand Slam: catching three different species of billfish on the same outing. You’ll need to catch three of the following four species while you’re offshore: black marlin, blue marlin, striped marlin, and sailfish. Costa Rica charters will go trolling for these billfish, dragging shiny baitfish to entice them to the line. All billfish are catch-and-release in Costa Rica, so make sure to bring your camera to photograph your trophies before releasing them for another day’s fight. Yellowfin tuna is another popular Costa Rica offshore species. Tuna show up in good numbers starting during spring months (end of April, beginning of May), with peak season during the summer months from June to August. Again, trolling is the preferred method for catching these fast-moving species. And if you keep your eyes trained on the schools of tuna, you may see mahi-mahi as well. These two are typically found in the same areas, eating whatever they can find. Catching a few mahi and tuna in one trip is certainly a fun-filled day of Costa Rica charter fishing!

It’s the trip of a lifetime when you’re fishing Quepos, Costa Rica. And the good news is that you don’t need any experience to join the fun. Quepos charter captains have the gear and experience you need for a fun and safe day on the water. All you need to bring is an adventurous attitude and a camera to capture the memories. Whether you’re visiting Quepos for vacation, family reunion, or wedding events, a fishing charter is the perfect outing for any size group. Search and book today with FishAnywhere.com to reserve your Quepos fishing excursion.