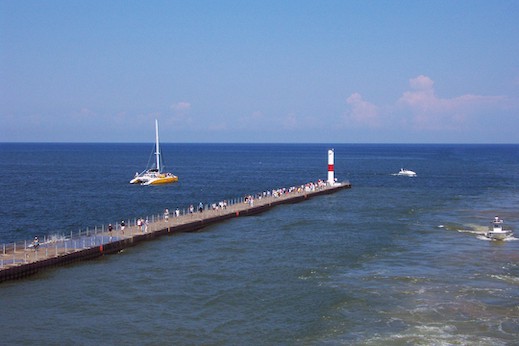 The fact that Lake Ontario is the smallest of the Great Lakes doesn’t mean a thing to fishermen in this area. Lake Ontario’s name in the old Huron Indian language is “Lake of Shining Waters” and it is also the lake of shining fishing. The lake is 193 miles long and covers 24,720 square miles along the Canadian / U.S. border near Rochester, New York. It’s famous for huge fish — muskies, walleye, all kinds of trout (brown, steelhead and lake trout) and even smallmouth and largemouth bass. Fishing is good all year, but the best fishing is in the summer, when the weather allows average fishermen a chance for some really above average catches. The nearly 700 miles of shoreline offers some fantastic spots for fishing as do the 1,864 islands in the lake. One of the most famous areas to fish is the Thousand Islands area. When the fish are biting, this is a busy place. Fishermen aren’t the only ones to hit “home runs” here. The Canadian city of Toronto is on the northern edge of the lake. Legendary Baseball great Babe Ruth hit his first major league home run there in Toronto and it left Hanlan’s Point Stadium and landed in Lake Ontario. It is believed to still be there in the lake. Lake Ontario is fed through the Niagara River with water from Lake Erie, as well as rivers including the Don River, Humber River, Trent River, Cataraqui River, Genesee River, Oswego River, Black River, and Salmon River. That’s one reason the lake is so fertile and full of fish. The mouths of these rivers are prime fishing spots at certain times. 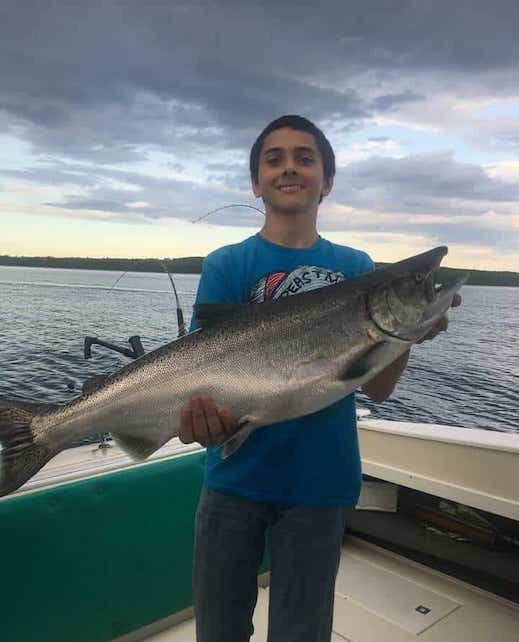 And speaking of fish, there are several target species for anglers. Lake Ontario may be the smallest of the big lakes along the border, but it is well known as the producer of the largest king salmon every season. They are prized as sports fish because they grow large, put up a huge fight, and are great table fare. In the spring, the salmon can be found closer to the shore and edges of islands. The Western side of the lake is a prime spot. In summertime, the fishing seems to be best on the Eastern end of the lake with the fish congregating near the mouths of the tributaries by the end of summer. They also head out to deeper water, sometimes suspending 80 to 100 feet deep over 400-500 foot deep water. King salmon grow rapidly here. The lake record is nearly 50 pounds and recently stocked fish have grown as large as 20 pounds after just three or four years because of the abundance of forage fish in the lake. Because of the movement of the fish, the size of the lake and the importance of being the right depth, most anglers who come here for short fishing trips like to hire guides to put them on the fish. They’ll know where the fish are and how to rig your bait to get it to the proper depth. That’s really important when fish are deep. Brown trout also thrive here and the best fishing is in the spring. As the weather and water warms, the fish follow baitfish along the shoreline and into the mouths of the rivers. Anything that looks or acts like a minnow is a good bait. Silver, black and silver, shad color, and blue and silver are top colors for crank baits. As water warms further into the summertime, fish move further offshore and fishing spoons or other deep lures down 40-50 feet works best. Walleye are also great here, especially in the Fall. The cooler weather really turns on the big walleye. A popular area is the Bay of Quinte. Fish usually run deep and they are big here, too. While 5-6 pounders are great for eating, nobody will want to take your picture unless you catch a 15 pounder or larger. The areas around the islands also produce some fantastic catches of smallmouth and largemouth bass. The area has been host to several major bass fishing tournaments over the years. Trolling is a great method to catch almost any kind of fish on Lake Ontario. Once again, spoons, artificial crank baits and even cut-bait can work. Fishermen here like to use spinners, dodgers or flashers, especially with cut bait, to draw the fish’s attention to the lure. If you see fish on your electronics and can’t get a bite, change baits. Keep trying to find out what they like and you’ll improve your day’s fishing in a hurry. 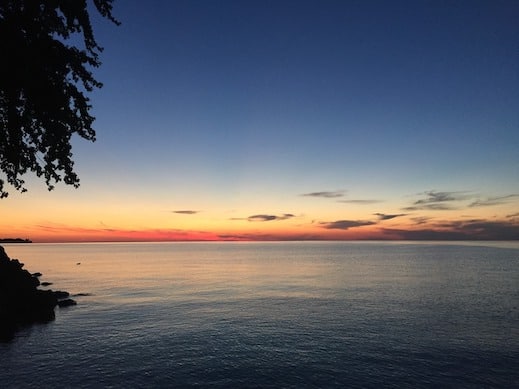 Charters and all-around good fishing are available without traveling far from areas in New York like Clayton, Lewiston or Rochester. These same areas also offer a multitude of facilities, restaurants and entertainment to help make your fishing trip a complete success on and off the water. Reserve your Lake Ontario fishing charter today and get the adventure started.