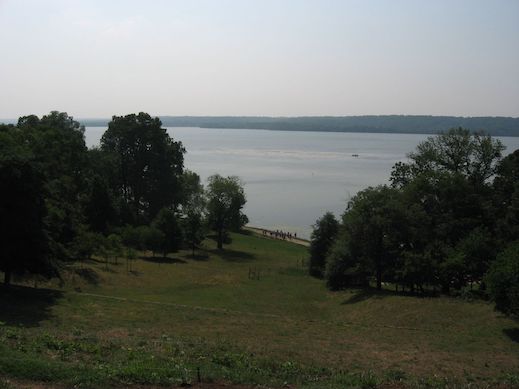 There’s a reason our first President of the United States built his home on the Potomac River. This serene river flows over 380 miles from the Appalachian mountains in West Virginia to the Chesapeake Bay in Maryland and Virginia. In fact, for most of its southern run, the river forms the border between Virginia and Maryland before it empties into the bay. It’s a view like none other with amazing fishing throughout. No wonder our friend George Washington built Mount Vernon on the banks of the Potomac River. The Potomac River is the fourth largest river along the East Coast of the United States and is known as the river that winds its way through our nation’s capital, Washington D.C. Some refer to it as the “Nation’s River” because of its proximity to some historic landmarks. But the Potomac River travels quite a distance before it reaches this southern section. Overall the watershed of the river covers 14,500 square miles and impacts millions of residents from Pennsylvania to Virginia. The North Branch begins in northern West Virginia with the South Branch joining near Green Spring, West Virginia. Then the Shenandoah River joins, as well as the Monocacy and Anacostia rivers near the District of Columbia to form the full force of the river seen at the mouth of the Chesapeake Bay.

Depending on where you are on the river will determine the species and technique for your Potomac fishing adventure. The North Branch Potomac River runs through the wild and undeveloped portions of West Virginia, from the Fairfax Stone State Park to when it converges with the South Branch. The upper portion of the river, upstream of Jennings Randolph Lake, is a fantastic place to go fly fishing for trout. The river is stocked with trout throughout the year and anglers won’t be disappointed with the opportunities found here. Keep in mind, the river runs through very remote areas of the state and you may need to hike quite a ways to your spot. Along the Potomac River, anglers will also fish Jennings Randolph Lake, a reservoir created in 1982 by the Army Corps of Engineers. The lake is also stocked with trout, and downstream from the dam is one of the best places to fish. It’s another remote location that offers wild and wonderful fishing. As the river flows from Westernport to Cumberland anglers will start to see bass species. Specifically, smallmouth bass, also known as “smallies”. This section of the river is very photogenic; known for its beautiful scenery. You’ll see more boating and water activities closer to Cumberland, and fishing is still very productive. Cumberland is the second-largest city on the Potomac, second only to Washington D.C. Fish downstream of the Blue Bridge Dam for a productive day of bent rods. If you’re fishing during the cooler months of spring or fall season, you’re sure to find smallmouth bass at the end of your line. Downstream from Cumberland is where the South Branch joins with the North Branch. The South Branch begins near Hightown, Virginia. Once the two join they become simply the Potomac River until its end at the Chesapeake Bay. Near the District of Columbia are several aqueducts that offer some of the best fishing spots on the river. In this area anglers will target walleye, bass, and baitfish. As the Potomac River approaches the mouth of the Chesapeake Bay, anglers will find that the river is affected by tides. This is known as the tidal Potomac River, and the fishing is by far some of the best in the area. Anglers will drop lines, crab pots, and nets for a variety of species.

Fish Species of the Potomac

Not many anglers fish the Potomac River from end to end. Anglers in West Virginia will have a much different experience from those near Washington D.C. The river is home to a variety of species from trout and smallmouth bass to walleye and striped bass. Brown trout and rainbow trout are stocked in the upper branches of the river annually. Many anglers opt for fly fishing as their technique to land them. There are sections of the river that are catch-and-release only, so make sure you know the local regulations before heading out. Fishing the many tailwater sections of the river are really good holes for smallmouth bass. Fly fishing and conventional rods are both used to reel in this species. They don’t grow to quite the size of lake smallies, but they’re still a really good catch. If you’re looking for a freshwater fishing adventure, the Potomac River awaits your arrival.

Ready for a history lesson that’s not boring? Visit the Potomac River and get schooled in some fantastic fishing. Hire a local guide to teach you everything you need to know for a productive day of bending the rod. And there are plenty of places along the river to start your adventure. Whether you’re near the Upper Potomac and tributaries in West Virginia, or near the nation’s capital, it’s a good day of fishing when you’re on the Potomac.