Tampa Bay Tarpon Fishing: What You Need to Know 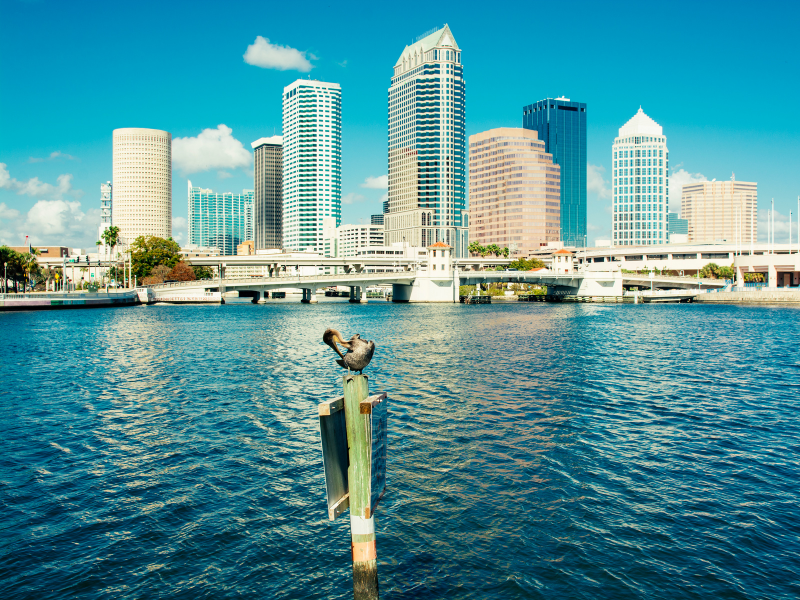 Florida's Gulf Coast is a world-renowned Tarpon fishing destination, and Tampa Bay is at the heart of it all! Every year, thousands of anglers come to Tampa to try their luck at reeling in these giant game fish. Tampa Bay is home to a large population of tarpon, and the fish congregate in the bay to feed on the many baitfish that live there. The Tampa Bay area also has a large number of charter boats that cater to anglers looking to catch a tarpon. Whether you're an experienced angler or a novice, there's a charter boat captain who can help you have a successful day on the water. Tampa Bay tarpon fishing is an experience you won't soon forget.

Tarpon are saltwater fish that can grow up to 8 feet in length, nearly 300 pounds, and up to about 50 years old. They have a large, silvery body and greenish-blue back. Tarpon have an elongated dorsal fin that makes them easy to identify, and scales that can grow up to 3 inches in diameter. They are muscular, hard fighting fish with virtually no food quality, making them a prime target for "catch and release" sport fishermen! These fish are seasonal in the Tampa Bay area, with the bite picking up in late April and dying down in early August. Peak time to fish for Tarpon is June through early July. 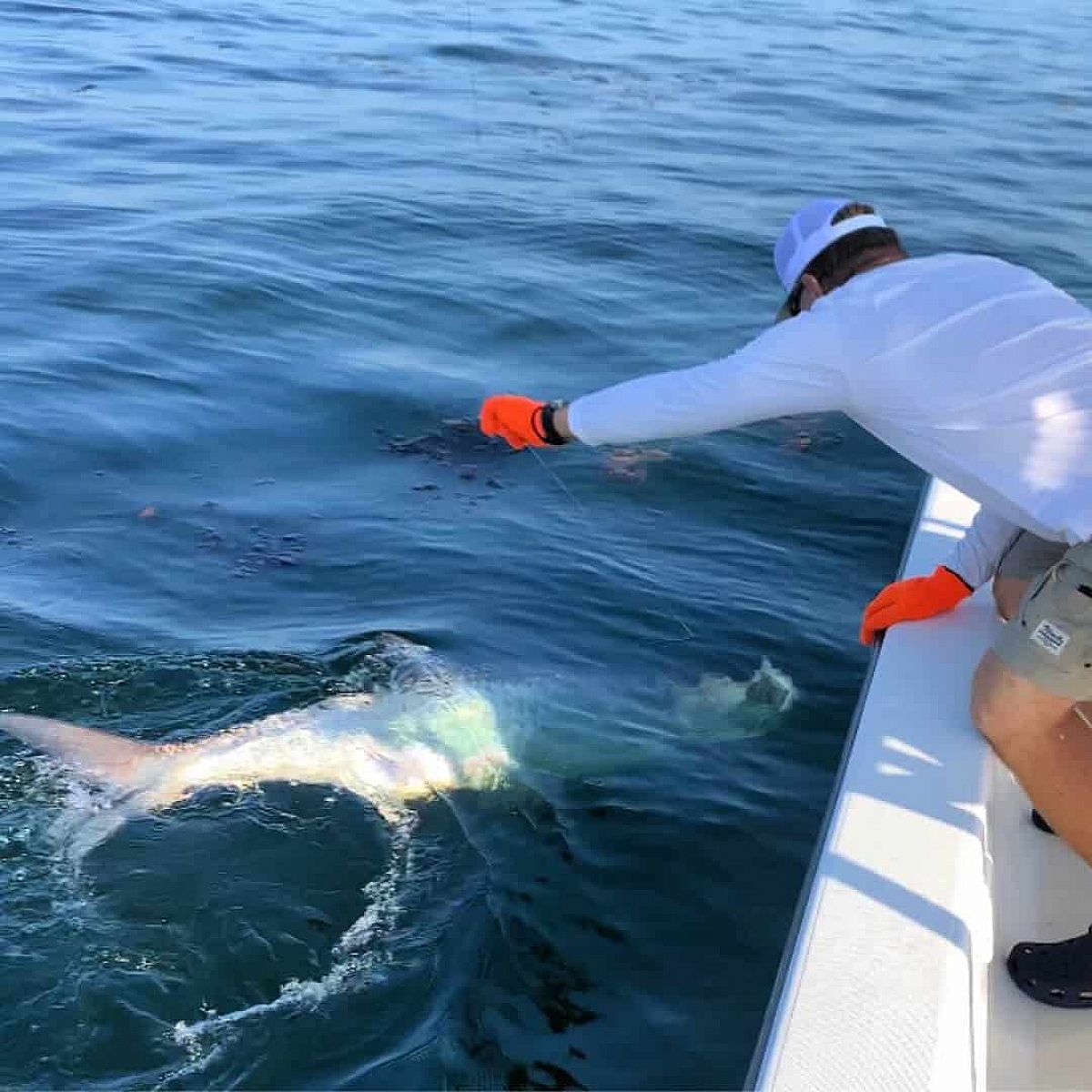 Tarpon can be caught on a variety of rod and reel setups including spin tackle, conventional tackle, and fly tackle. They can also be targeted using live bait or artificials. If you are targeting your first Tarpon however, a heavy setup with live bait on a circle hook will be your best bet.

Anglers chasing Tampa Bay Tarpon should have at least a 5000 series spinning reel and a medium-heavy action rod. Spool the reel with 40-60 pound braided line, and tie on a 6 foot 50-80 pound fluorocarbon leader. Use at least a 4/0 hook. The tackle specs will really come down to the size of the Tarpon in the area as well as nearby structure, but go heavy when in doubt, especially if you're trying to scratch your first Tarpon off of your list. Tarpon are very acrobatic fighters and are known to spit hooks frequently on jumps. Heavier tackle can help avoid a heartbreak.

As for bait, live crabs, pinfish, or greenbacks will produce. Tarpon will also hit Mullet or Ladyfish, both of which can also make good cut bait for Tarpon in Tampa Bay. Lures that imitate the aforementioned bait will suit anglers looking to use artificials. Large swimbaits work well, as do larger paddletail lures with a 1/2-1 oz jig head depending on conditions. Fly anglers can use flies that imitate the listed baits as well. Tampa Bay fly fishermen targeting Tarpon should use an 11-weight rod with a 10/11 or 11/12 size reel.

Anglers looking to catch Tarpon off of Tampa Bay beaches will typically set up about 100 yards off the sand and keep an eye out for Tarpon rolling on the surface. Once fish are spotted, a quiet electric trolling motor will be used to ease the boat into casting range. Throw the bait ahead of the lead fish, and slowly retrieve it toward the boat. Do not slow down the retrieve if a Tarpon shows interest, and be ready for a strike.

If the school passes you, do not cast on top of them while they are moving away. This typically spooks them, and can shut down the potential for a bite. Instead, maneuver the boat ahead of the school, and give it another cast.

Tampa Bay's many bridges attract tons of baitfish as well as predators, including Tarpon. This can be more of a game of chance, but is easier fishing for both Captain and angler compared to fishing off of the beaches (at least until a hookup). Anglers would want to anchor the boat just off the bridge, and throw live bait into the current created by the bridge. The next step is to wait.

Once a Tarpon takes the bait, you can chase the fish in the boat to create angles and keep it away from bridge pilings. A quick release clip on the anchor can be critical. If the fish heads to the bridge and cuts around a piling, it is very likely that the line will break and the fish will be lost. Once the fish is either lost or landed, the boat will return to the anchor and start the process over.

Dredged out shipping lanes create deep environments with swift current. This current keeps bait coming through, and Tampa Bay Tarpon stack up ready for a meal. This type of fishing is not for the faint of heart, as many boats queue up to drift through the pass before getting back in line. Fellow anglers will likely be very quick to let you know if you are in their way or scaring the fish, and chaos ensues when multiple boats hook fish at the same time.

Anglers will want to try dropping baits deep as well as keeping bait near the surface to elicit a strike. Typically lures and baitfish are fished deep while crabs and shrimp are drifted near the surface. If you are a novice angler with your own boat, your best bet would be to simply observe initially to understand how the boats are moving through the pass. You can also hire a Tampa Bay fishing guide that can advise you on technique and etiquette.

The clear waters of the Tampa Bay flats are home to a number of sought after game fish. Fishing the flats for Tarpon can be challenging, involving hours of gazing into open water behind polarized sunglasses. Tarpon are more likely to move single file on the flats as well, making them not only more difficult to spot, but also requiring more precision in your cast and presentation.

The same baits work well on the flats, typically freelined. As this can be just as much hunting as it is fishing, first time Tampa Bay Tarpon anglers would likely opt for bridges, beaches, or passes to maximize the likelihood of a hookup.

Given the size of the fish, first time Tampa Bay Tarpon anglers are often surprised by how subtle the hit can be. Resist the urge to immediately set the hook until you ensure that the slack is out of the line, and the fish is moving with your bait. Once the hook has been driven home, hang on for a drag peeling run, and get ready for the fish's first jump.

Tarpon anglers have a saying; "bow to the king." This refers to bending at the hips, and lowering your rod tip while the fish jumps. If the line is kept tight when the Tarpon breaches the surface, it is much easier for the fish to spit the hook or break the line.

Tarpon are aggressive, tenacious fish. They will literally fight to their death. It is important to exercise care in landing and releasing a Tarpon. The fish should be kept in the water for a photo, and quickly revived and released.

Tampa Bay is home to some of the best tarpon fishing in the world. The fish can get up to 200 pounds, and put up a terrific fight. In order to catch these giants, you'll need some heavy duty gear. We've outlined what you need in terms of tackle, bait, and technique. Now it's your turn. Search the top rated Tampa fishing charters, and book your next Tarpon fishing trip today!