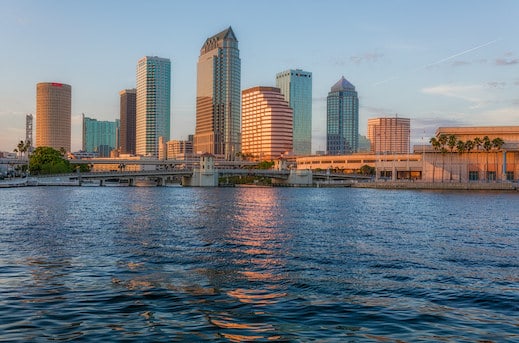 On Florida’s west coast is the beautiful city of Tampa. Home of the NFL Buccaneers, MLB Rays, NHL Lightning, adventure park Busch Gardens, and over 3 million residents. It’s also a favorite destination for Florida tourists; in 2019 over 15 million guests traveled to Tampa. Anglers fishing from Tampa can travel to Old Tampa Bay, Tampa Bay, or the Gulf of Mexico for their excursion. If you don’t have a boat, Old Tampa Bay has a couple of really great shore fishing spots. Check out the north side of 4th St. Fishing Pier on the west side of the bay. Fish the flats, passes, oyster bars for snook, trout, reds, and sheepshead. A shrimp or jig can catch a ton of fish under the I-275 bridge. A very popular place to fish over Tampa Bay is Skyway Fishing Pier, located off I-275. The pier used to be a bridge between Tampa and Sarasota before the new Sunshine Skyway Bridge was built. It’s now the longest pier in the world and gives visitors unparalleled access to the bay. There is a fee to access the pier, but it’s very convenient to drive to your fishing spot and have everything right there. It’s open 24-hours, and many anglers take advantage of this convenience. Depending on the season you can catch snook, tarpon, mackerel, cobia, sheepshead, snapper, and grouper from the pier. 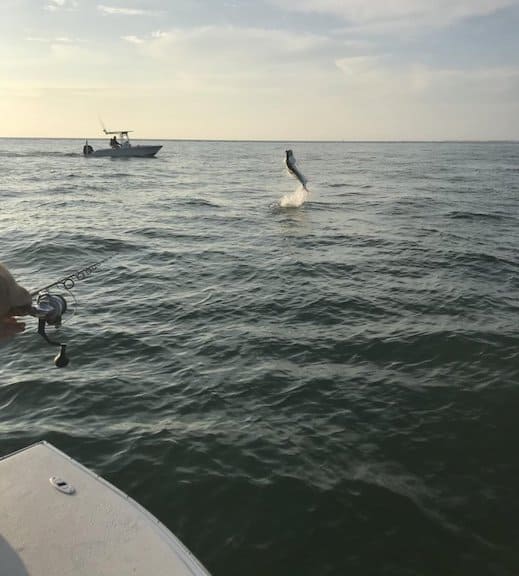 Tampa Bay is known worldwide for its population of tarpon. The Silver King reigns in Tampa Bay and anglers from far and wide come to the bay for the adventure of a lifetime. Tarpon are notoriously difficult fish to catch. The adrenaline rush of reeling in a tarpon is unmatched by any other species; it can take up to an hour to reel in a tarpon, depending on the size of the silver king and tackle you’re using. Once hooked they will run the line, jump and thrash, and do everything possible to spit the hook. In Tampa Bay, most tarpon weigh between 80 to 150 pounds, so imagine putting up a fight for about an hour with that amount of weight fighting back. Some of the local Captains report that a 63% chance of the line breaking off is expected, so it’s understandable that most anglers will count how many hookups they have, along with how many they reeled in. Tarpon are catch-and-release throughout the state of Florida, so after your fight, take a picture with your trophy and then safely release back into the waters. If your silver king is over 40”, the fish must remain in the water for pictures in accordance with local laws and regulations put in place to protect the tarpon population. Less handling for those monsters is better for their survival rate. In Tampa, tarpon run from April to October with peak migration occurring from May to July. Tarpon will eat crabs and shrimp, or lures that imitate these crustaceans. Drift the bait as the tide is going out and the tarpon can’t resist. Fly fishermen and women can use a variety of patterns to attract the silver king. Fish the golden hours (sunrise or sunset) around the Sunshine Skyway Bridge or near Egmont Key by the Lighthouse and you’re sure to have a successful Tampa tarpon trip. 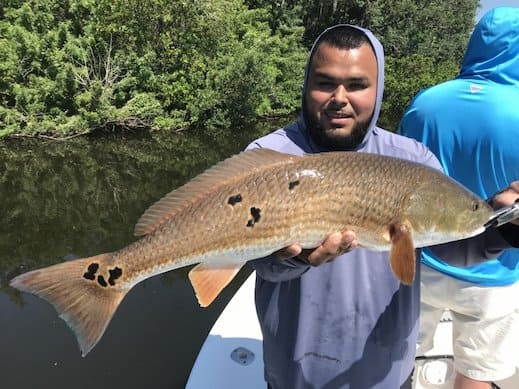 Throughout Tampa Bay and the shores of Tampa are a variety of inshore species. The most notable are redfish, snook, and spotted seatrout. Redfish are identified by the black dot or dots near the tail. Bull reds are female redfish that are 35” or more. Slot reds are both male and female redfish that are 20” to 28”. Tampa’s redfish prefer shallow waters, some shallow enough that you can see their backs. Fish the mangroves and sandy shores for your next Tampa redfish trip. Another favorite inshore species is the snook, rhymes with “hook”. Snook are silver with a black line running from head to tail. They are bottom dwellers found near Tampa mangroves, grassy or sandy bottoms. Snook can grow up to 22” and weigh as much as 30 pounds. Drift fishing for snook is the most common technique used by anglers; use live bait such as pinfish, mullet, shrimp or sardines. And, finally, the spotted seatrout or speckled trout is another popular inshore Tampa fish. The black spots along their back and tail makes this fish easily identifiable. They are commonly 14” but can grow to almost 40” and weigh 17 pounds. Again, check the mangroves and grassy areas for this inshore species. Fish in the early morning when trout are most active, and drift your live bait along the bottom. 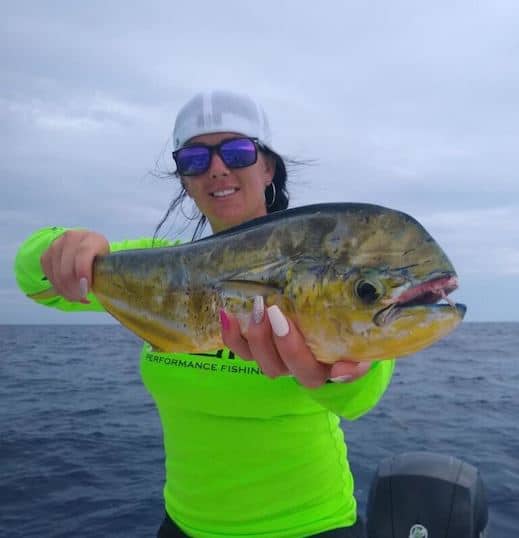 Heading out to the Gulf of Mexico anglers can target a variety of offshore species. Tampa’s access to the Gulf is a fantastic starting point for any offshore adventure. Captains typically pilot center consoles with a t-top for shade and will fish a minimum of 6 hours. This allows plenty of time to get to the desired depths for targeting pelagic and deep sea species such as marlin, tuna, and wahoo. Snapper, grouper, amberjack, and mahi mahi or dolphin are some more favorites for Tampa offshore charters. Mahi are top water species that are usually found near debris or floating grass beds. Trolling for dolphin is always a fun offshore excursion. Once there’s one mahi on a line, the Captain will leave the fish on the hook without reeling it in. Dorado are schooling species and will stay close to the hooked up Mahi. This allows the rest of the boat to cast and hook up on other members of the school. Before you know it there’s a boat full of mahi mahi and everyone’s looking forward to a delicious feast.

Tampa charters fish twelve months of the year, weather depending. Usually, though, if the water is too rough in the Gulf captains will switch gears and fish the bay. There really isn’t a bad spot for fishing in Tampa. Start your adventure today and get hooked up with the adventure of a lifetime. Find your Tampa fishing charter here.