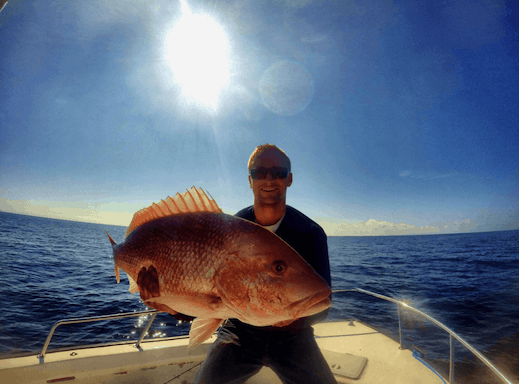 On the beautiful Emerald Coast of Florida you’ll find Pensacola, the westernmost city in the Florida Panhandle and the start of great Florida fishing adventures. Not to be confused with Pensacola Beach, another great Florida fishing destination, the city of Pensacola is more inland and right off Pensacola Bay and Escambia Bay. It’s known as the “Red Snapper Capital of the World” because the species migrates to the bay area when the temperature drops. This migration of red snappers to the bays near Pensacola draws anglers from near and far.

FWC conservation efforts have created a red snapper season in the summer, and a mini season in the fall (usually weekends only in October). Red Snapper are a common target for Pensacola fishing charters because they are relatively easy to catch while still putting up a good fight, and they are delicious table fare. Anytime a red snapper is caught out of season it’s catch-and-release only. Hire a local Pensacola fishing guide to help with all the regulations.

Red Snapper are bottom dwellers. So no matter if you’re fishing 30 feet of water or 200 feet, make sure you have enough line to drop your bait to the bottom. They are usually hiding out near structures such as reefs, rocks, wrecks, or oil platforms. Live bait is the best option, but some will bite on a vertical jig. Your gear weight will depend on water levels. For those deep sea trips make sure you have heavy tackle. But in the bay light or medium tackle will work just fine. 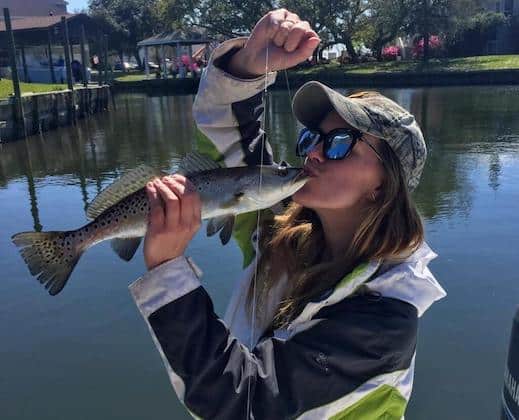 Believe it or not, there are other species in Pensacola other than red snapper. Spotted seatrout (or speckled trout) is another favorite. Trout are typically found near grassy, muddy, or sandy areas near the shore. When the weather is cold they are closer to the shore, while summer temperatures draw them to deeper waters. Live shrimp or baitfish under a popping cork is another great way to get them to your hook. The popping cork makes a noise imitating the sound of crab, shrimp, or baitfish and immediately gets a trout’s attention. This technique is also great for luring snook and redfish.

Redfish, or red drum, are part of the drum family. Redfish are easily identified by the black dot at the beginning of their tail and are typically bottom dwellers. Pensacola Bay is a fantastic place for fishing bull reds, female redfish that are typically over 30”. Slot reds are typically 20”-28” and are also found in abundance in Pensacola. Again, get that popping cork ready and bottom fish, very similar to trout fishing.

When redfish are migrating you can see the school of fish move in mass, and sometimes see that famous tail on the topwater. Make sure you have a really good pair of polarized sunglasses when sight fishing for reds. Even if you don’t have a boat, there’s still plenty of opportunity to catch a nice load of inshore fish species. Whether you fish from the surf or pier, you’re bound to get a good harvest.

To access Pensacola Bay without a boat check out the Pensacola Bay Fishing Bridge. This 2,500 foot “bridge” runs parallel to the bigger Pensacola Bay Bridge. Anglers can either walk or drive the bridge to their fishing spot (just no RVs or motor-homes allowed on the bridge). Even though the big bridge is currently under construction, Pensacola residents are still taking rods and reels to their favorite fishing spot. There is a small fee to fish from the bridge, but a fishing license is not required. 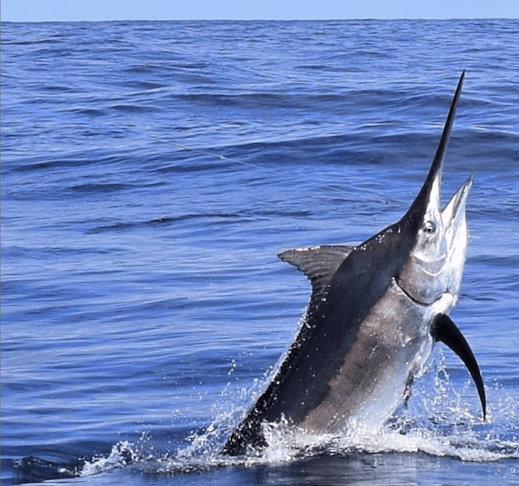 When running offshore from Pensacola you’ll be going to the beautiful Gulf of Mexico. Here you’ll find a variety of offshore species, and even a few inshore species who have made their way to the Gulf. Amberjack, snapper, grouper, mahi mahi, cobia, and tuna are just a few of the notable offshore species. If your group travels to the deeper seas of the Gulf, you’ll also see some marlin.

Marlin, part of the billfish group, are very popular in Pensacola’s fishing community. There’s even a club that hosts the Pensacola International Billfish Tournament every summer. Fishing for white marlin and blue marlin are really fantastic deep sea excursions. If you don’t have an offshore vessel, hire a professional Pensacola fishing charter captain that does.

If the boat has outriggers and downriggers this makes trolling for marlin much easier. The outriggers and downriggers will keep the bait in the right place to attract your target. Trolling is a technique where the bait is dragged behind the speeding boat. The speed of the boat makes a huge difference for a successful outing. Too fast and the fish may not see it, too slow and they may not be interested. This is another plus to hiring a professional offshore captain, they’ll have the experience to know the right speed for a successful catch.

A favorite Pensacola offshore destination is the largest artificial reef in the world, the sunken aircraft carrier USS Oriskany. Created in 2006, the 44,000 ton aircraft was purposefully sunk to promote marine life in the area. Anglers fishing the area should keep an eye out for divers, as this is a hotspot for those wanting a fantastic dive experience. It’s known as the “Great Carrier Reef” and is a great spot to grab snapper, grouper, and amberjack, to name a few.

Pensacola Fishing Throughout the Year

You don’t have to go far for some fast action on false albacore tuna this month. They run near the beaches are provide a great bonus for fishermen. They are great to catch, but not favorites among those who like top table fare. Grouper are biting and the speckled trout are inshore. Mangrove, vermillion, and red snapper are all fun to catch this month. Add Triggerfish to your list for good action, and delicious fillets.

Bonefish are one of the best fighting fish around, and whether you fish spinning tackle or fly tackle, now’s the time to get your line straightened big time. Bull redfish are also making a run, and can be some real bruisers! The same species as January — the snapper family and triggerfish — both remain good.

Sheepshead are a great family fishing target because when you catch one, you’ll usually catch one more. And one more. And, well, you get the picture. Speckled trout and redfish are picking up the spring bite, and Cobia can be found cruising as well. Grouper fishing is excellent. A few wahoo are starting to show up offshore.

Cobia, redfish, specks and sheepshead continue to be part of the gameplan. Amberjack, black drum, red drum and grouper fishing is good. King and Spanish mackerel are good and pompano fishing is excellent. Sheepshead are really turning on, and the snapper bite is super.

Black and red drum are a great place to start when it comes to fishing selections this month. The weather is mild, but the fishing is hot. Grouper are also biting and beginning to school up for fast action. King and Spanish mackerel fishing is good, and you can start adding sailfish and shark to your prospects. Snapper are always hot here, the key is just staying on top of them. That’s where a good charter captain comes in!

It’s getting hot — the weather and the fishing. King mackerel begin their run and red snapper fishing is on. You can add a long list of targets including the kings and Spanish mackerel, snapper, redfish, pompano, sharks and amberjack. And the tarpon are tuning up for a summer run. Don’t forget wahoo, either.

The water is really warming up, and most of the best fishing requires a trip offshore. This is the perfect time of year to book an unforgettable Pensacola fishing charter. A rule of thumb is the further you ride, the more and bigger fish you’ll catch. Book early and make sure your charter captain knows what you are looking for for. Just about everything is biting. Flounder, grouper, amberjack, Jack Crevalle, barracuda, bonito, mackerel, sheepshead and snapper are just a few popular targets. Tarpon fishing is getting hot, and blackfin and yellowfin tuna provide great action. Wahoo fishing also remains prime.

The list continues to grow. Bluefish, king and Spanish mackerel, and also snapper and grouper bites are on. Snapper and grouper love to school up on the offshore structure and a good guide can take you right to the hot spots. Barracuda, cobia, mahi mahi, black and red drum, and wahoo fishing is really good. Some of the big boys of the blue are also in their prime. Shark, Marlin, sailfish and both blackfin and yellowfin tuna are on. You can’t beat the once-in-a-lifetime fight that those bruisers give you.

Spanish and king mackerel are still biting, and you can add pompano to the list of favorable targets. Blackfin and yellowfin tuna, sharks, sailfish and tarpon continue to put the bend in the stoutest of rods. Triggerfish, wahoo, sheepshead, specks, Jack Crevalle and barracuda are also hot.

This time of year the flounder start moving out into the Gulf and provide some great fishing. Sheepshead, snapper of all kinds, triggerfish, speckled trout and both king and Spanish mackerel have their bite on.

The flounder bite continues to be impressive, and speckled trout and redfish action is tops. Snapper — black, vermillion, and red — are all biting. Bonito provide good action and the mahi mahi bite is still good.

Holiday fishing is generally not as fast as most of the rest of the year, but there’s still a good bite. And the best thing is that fishing waters aren’t crowded. Go after speckled trout and bull reds, flounder, grouper, snapper and triggerfish. Sheepshead provide lots of fast action.

Fishing in Pensacola is a great way to spend your day. Whether it’s inshore on the Pensacola Bay or offshore chasing billfish, you’ll have memories to last a lifetime. Find your next Pensacola fishing charter here.

Took a chance and found Capt. Ronnie online. Man did we get lucky. Best c...

Took a chance and found Capt. Ronnie online. Man did we get lucky. Best charter experience I have had. Capt. Ronnie got us on fish quickly and we stayed on fish the entire charter. We caught almost our limit and could eat for about three days. What a great trip. We will back for years to come. I might also add that Capt. Ronnie had the perfect playlist that everyone loved.

No Limit Charter And Guide

Southbound Tournament fishing Charters are first class. My wife and I have ...

Southbound Tournament fishing Charters are first class. My wife and I have used them several times and we are never disappointed. Great rates and we have always caught plenty of fish. Not only is the fishing great, but the hospitality and knowledge of fishing is superior to all others. We use Southbound every chance we get to go fishing. Highly recommended.

Took a chance and found Capt. Ronnie online. Man did we get lucky. Best charter experience I have had. Capt. Ronnie got us on fish quickly and we stayed on fish the entire charter. We caught almos...

Took a chance and found Capt. Ronnie online. Man did we get lucky. Best charter experience I have had. Capt. Ronnie got us on fish quickly and we stayed on fish the entire charter. We caught almost our limit and could eat for about three days. What a great trip. We will back for years to come. I might also add that Capt. Ronnie had the perfect playlist that everyone loved.