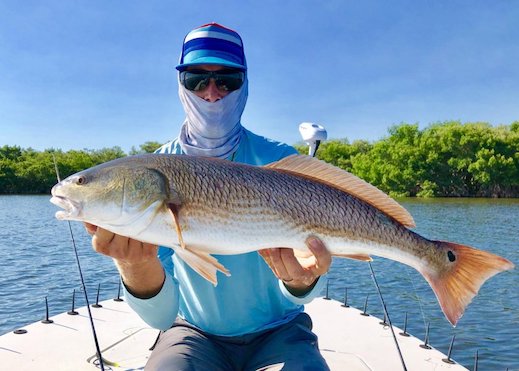 Florida has the most coastline of any state in the US and a lot of that is because of the barrier islands that form bays. These bays are home to some of the most spectacular fishing on earth. Sarasota on Sarasota Bay is a fisherman's paradise. You can fish in the shallows along the beaches or run offshore to tangle with the pelagic monsters that cruise the blue water. Your Sarasota fishing charter captain knows where the fish hang out, and will work to ensure that your fishing trip is a success.

Some of the species you can catch are seasonal and most have bag limits. Charter captains know the rules and regs. If you are after something specific, check the Florida Fish and Wildlife Conservation Commission's seasons and regulations list for the most current information. 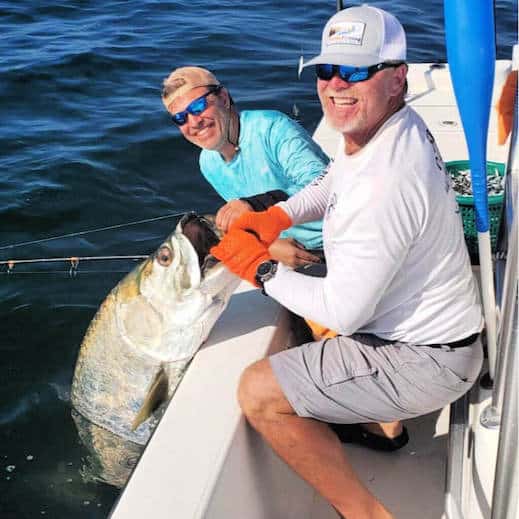 Sarasota is famous for its Silver Kings, the big tarpon that cruise the bay looking for something to eat. These fish can weigh more than 200 pounds. Tarpon are famed for their line-stripping runs and acrobat displays. If you are looking for a memory of a lifetime, connect with one of these bruisers on light-to-medium tackle. Your best bet for hooking into one of these arm-strainers is a live pinfish, but they will fall victim to a variety of artificial lures including flies. Fishing for Tarpon is a very "active" effort. If you are new to tarpon fishing, booking a Sarasota fishing charter to stalk them through the bay would be your best bet.

If you would rather have something for the fish cooker that night, then focus on the seagrass beds or the beaches. Speckled trout and blues are common here, however the blues do not typically reach the size they do up north. Although blues are not typically regarded as premium table fare, it’s all in how you prepare them. Clean them quick and smoke the fillets. Jigs, grubs and lipless crankbaits are excellent choices for artificial lures. Both also eagerly take squid, shrimp and cut bait.

A live shrimp under a popping cork is a dinner invitation a gator trout can't resist. Whiting, a very popular and easy-to-catch fish, cruise the beaches. Small hooks and pieces of bait will put dinner on the table. 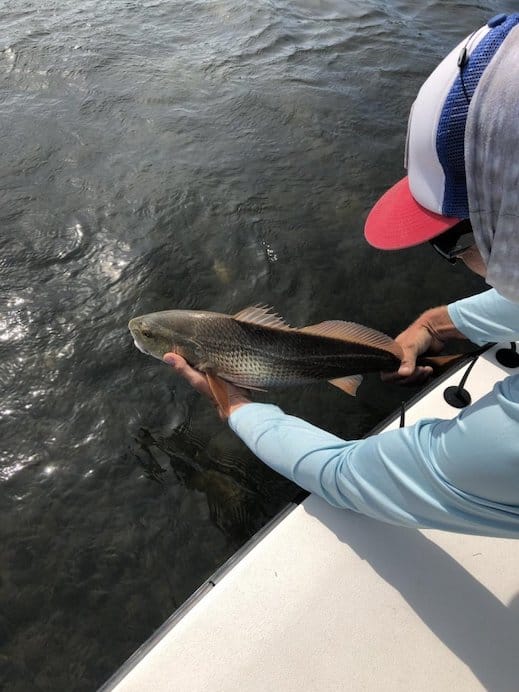 The big reds are found around the oyster bars trying to root out crabs, shrimp and other prey. When you see big fins slashing the water in the oyster shallows, get ready. The fish are feeding and are easy to catch. Thanks to Florida's redfish slot limits, Sarasota Bay is now home to some true monster redfish so make sure you have a good camera or camera phone for pictures. Your friends back home will be so jealous!

Speaking of oyster beds, if you can find an oysterman culling his catch, then get ready. Sheepshead bigger than a dinner plate can be so thick you might believe you can walk across them. Fiddler crabs, caught on the bayside flats at low tide, are a popular bait. You can also use barnacles! When the sheepshead are eating, they'll take just about anything.

Spanish mackerel and snook, pronounced the same as hook, are also common in the bay. Use silver spoons and jigs tipped with cut bait or a cigar minnow for casting to the Spanish. Your Sarasota fishing charter captain may also troll dusters and bait behind the boat to find them.

Snook is one of the most popular fish in Sarasota for the inshore anglers because of how hard they fight and how they taste on the table. Largemouth bass lures work well on snook. 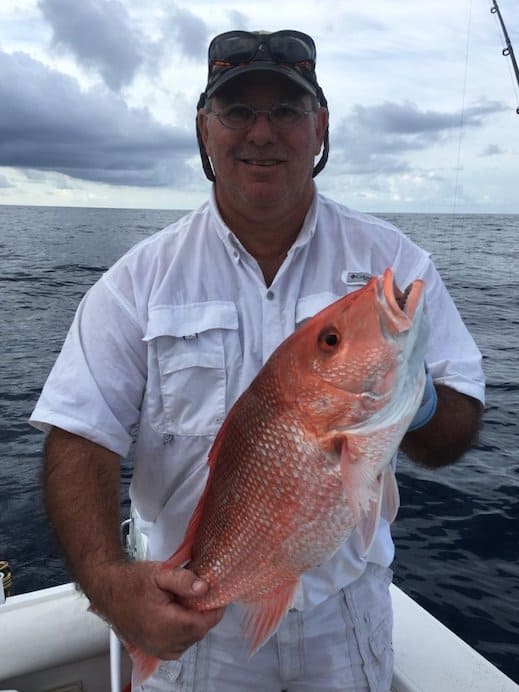 A lot of people book a Sarasota fishing charter for offshore fishing. The most popular targets are grouper, amberjack, sailfish and mahi mahi or dolphin. All provide excellent table fare and well as plenty of fight on the line. Catching these four top species requires different tactics. The dolphin is a surface fish. Your captain will look for weed patches, debris or pretty much anything at the surface. Mahi congregate around whatever they can find on the surface. Then it's all hands on deck because you can expect every line to hook up.

Sailfish can often be found driving schools of baitfish to surface. What makes these billfish such a target is their speed, up to 68 miles an hour, and their massive dorsal fin. Captains look for sea birds wheeling overhead and diving down to the water, a sure indicator that something is driving a school of baitfish to the surface. Likely, the captain will troll big dusters or squid rigs until he finds fish.

Grouper and amberjack are found in the deep water near the bottom. Your charter captain knows the rocks and reefs where these fish like to hang out. They both congregate in schools so where you find one, expect more. Catching these is a test of strength. First, you have to get the fish off the bottom structure, then you have to fight him all the way to the surface. It will certainly test your arms!

Sarasota "winter" weather can be very fickle, and the inshore fishing is heavily dependent on it. Snook become extremely lethargic when water temps get into the low 70s, and more so in the 60s. If a sustained cold front has come through, Snook are less likely to be cruising the flats, and more likely to be holed up in residential canals and backwater areas.

Offshore fishing is a different story. January is about the best time of the year for an offshore fishing trip to target Grouper on the reefs and wrecks off of the Sarasota coast. The three most commonly targeted grouper species; Black, Red, and Gag, are all around in abundance.

February is an interesting month in Sarasota as winter weather patterns subside, and Floridians get their first taste of spring. Inshore anglers will want to continue to account for possible cold spells, however Sheepshead will be out in big numbers. If the weather is starting to warm up, Snook will venture out of the canals they called home through the cold.

The Grouper bite is still on off the coast, and this is also a great time of the year to target Tripletail. Kingfish also start to make an appearance, although it may still be too early in the year for a targeted trip.

With the cold mornings a thing of the past, Redfish, Trout, and Snook will be showing up on the flats in better numbers. The Sheepshead are still around as well, though the bite cools off towards the end of the month. Spanish Mackerel start showing up in Sarasota waters in March, and can be a blast on light tackle.

Offshore, the grouper bite continues while the Kingfish bite heats up. Tripletail are still around as well.

Late March into early April is typically the perfect time of year to take your Sarasota Kingfish trip. They will be around in good numbers, and are known for their line stripping runs (and make for an amazing fish dip). Their relative, the Spanish Mackerel, is still off the beaches in abundance as well. Anglers who were targeting Sheepshead last month will likely want to start going after Mangrove Snapper. Snook, Redfish, and Trout are cruising the flats enjoying the warm weather. Speaking of warm weather, the "Silver King" usually starts showing up in Sarasota in April...

The water is warm, the sun is out, and the afternoon downpours are not quite as frequent as they become in the middle of summer. It's a great time to plan a fishing trip! If there's one fish that Sarasota anglers have on their minds this time of year, that would be the Tarpon. Tarpon, also known as the "Silver King," are one of the most challenging and highly sought after sportfish in the world. Boats will head out early to be set up off the beach by sunrise, waiting for a glimpse of a rolling Tarpon. Although these fish can provide the memory of a lifetime, Tarpon trips are not recommended for inexperienced anglers, or families simply looking for something to do in the area. It is common to see Tarpon and not get a bite all day. It is also VERY common to hook up to a Tarpon and have it break the line or throw the hook.

Tarpon fishing is in full swing, and boat ramp traffic will be heavy. This could be beneficial to inshore anglers, or Sarasota vacationers simply looking to catch something, as the flats and backwaters will see far fewer boats and subsequently, less fishing pressure. Expect to catch Snook, Redfish, Trout, and Spanish Mackerel.

With the heat of July, it becomes more important to get on the water early. Many anglers will head out before first light, and be off the water before noon. Between 11:30 and 4 PM or so, the bite slows down quite a bit, so plan for a morning or evening trip. Tarpon will still be around through July, and the Mahi bite is still on offshore.

August typically sees the last of the Tarpon in Sarasota for the year, though the large summer Snook can still be found off the beaches before making their way back into the bays and canals. The Redfish bite is hot on the Sarasota flats in August, and anglers can expect to encounter Trout and Snook as well. Artificals work well in the early morning, but anglers will switch to live bait as the temperature picks up.

Schools of Redfish will still be cruising the flats in August, and many of the Snook off of Sarasota's beaches will have moved into canals and backwater. Live Pilcahrds make for great snook bait, and artificials will produce later into the day with the cooler water temps. Tourism slows in September, meaning less fishing pressure and fewer boats on the water. This also makes it a great time book your Sarasota fishing charter, as the fish are still around, and Captains tend to have more availability.

Spanish Mackerel are still around in October, but are beginning their migration south. They will be feeding voraciously to fuel this journey. The cooler, more stable weather makes for solid inshore fishing, with Snook stacking up around structure and mangroves. Cobia are back off the beaches and offshore, and the Kingfish bite starts heating up again.

November usually sees the first of Sarasota's cold fronts, and baitfish will begin to become more scarce inshore. Fish in the bay start moving to their winter haunts, typically canals and backwater. Trout, Spanish Mackerel, Pompano, and Bluefish are on the flats, and can be caught on artificials throughout the day. The Redfish bite cools down with the weather this time of year, although the aforementioned Bluefish begin showing back up. The Kingfish bite is still on offshore.

December sees Sarasota and the fish that call it home back into the winter weather pattern. From now through February, Snook will become less common in the bay, favoring residential canals and mangrove backcountry. Kingfish are still offshore, and the Grouper that inhabit the reefs and wrecks year round are ready to eat. The Sheepshead fishing starts picking back up, and these fish can typically be found around docks and seawalls.

Sarasota is a great destination for inshore and offshore fishing trips! The local captains are fishing every day throughout the year (weather permitting). Book your Sarasota fishing charter today!